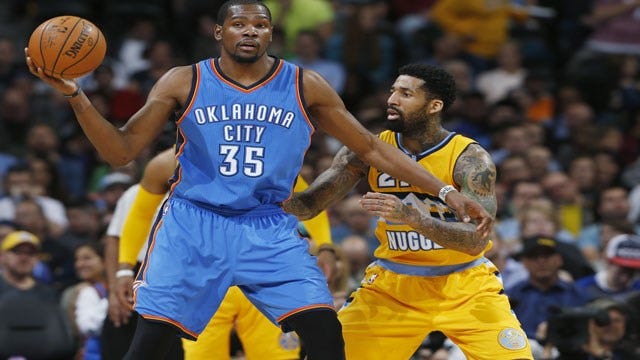 For the reigning MVP, points flowed like running water down a Colorado mountain stream on Monday night as the Thunder drowned the Nuggets 124-114 at the Pepsi Center.

Durant's 40 points felt like 70. KD drained a career-matching seven 3-pointers and never even appeared to break a sweat.

“We were moving the ball,” Thunder coach Scott Brooks said. “We were doing a good job of setting up and getting open and Kevin was on fire. He had a lot of heat-check moments and everything was falling for him from the 3-point line. And the bigs did a great job of setting picks; quite a few of them.”

It was Durant's second-highest scoring output of the season, four shy of his 44-point explosion against the Suns back on New Year's Eve.

“It was good to see. He works extremely hard, he's a talented guy, his skill set is (at) a high level but his work ethic is what separates him. He's one of the best players on the planet and he had a game going. That's what special ones do.”

Russell Westbrook quietly poured in 26 points and nine assists, while rookie Mitch McGary not-so-quietly scored 17 points and grabbed 10 rebounds. The Thunder's first-round pick has now scored 36 points on 14-of-21 shooting and snagged 20 rebounds in OKC's past two outings; which have also been McGary's first two extended opportunities of the season.

“I was disappointed he didn't get the 19 (points) like he had yesterday afternoon,” Brooks joked afterward. “We'll (have to) talk about that.”

What the Thunder won't have to talk about is their poor play. OKC (27-25) has now won four out of five and sits two above the .500 mark for the second time this season.

Denver (19-33) has now lost 13 of its past 14 games. Ty Lawson led the Nuggets with 22 points on 8-12 shooting to go with nine assists. Kenneth Faried also scored 22 to go with his 10 rebounds, while rookie Jusuf Nurkic posted 16 points and 14 boards. Wilson Chandler chipped 23.

The Thunder's win combined with the Pelicans' loss pulls OKC even with New Orleans. It also pulls the Thunder within 1 ½ games of the Suns for that elusive No. 8 playoff spot. Oklahoma City has a real chance at a signature win on Wednesday when the Grizzlies pay a visit to Chesapeake Arena.