House Votes To Fund Department Of Homeland Security Though September 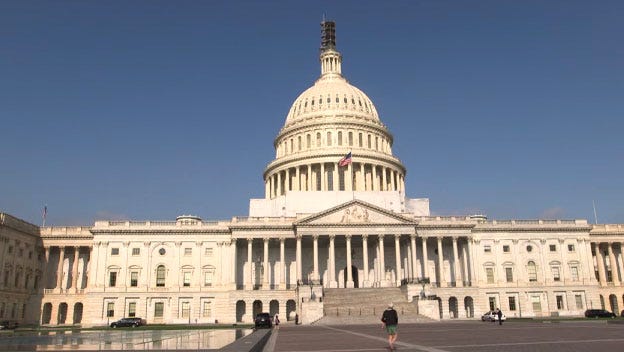 They came, they saw, they blinked.

The House of Representatives passed a bill on Tuesday funding the Department of Homeland Security through the end of September, effectively ending a congressional standoff that nearly shut the department down at the end of last week.

The bill, identical to a measure that cleared the Senate last Friday, passed by a margin of 257 to 167, with 75 Republicans and 182 Democrats voting in favor. The bill did not include language preventing President Obama from moving forward with his proposal to shelter millions of undocumented immigrants in the U.S. from deportation by offering them work permits.

The outcome marks a stinging defeat for conservatives in Congress, who had demanded that any bill to fund DHS include language tying the president's hands on immigration. Boehner broke the news to the House GOP caucus during a closed-door meeting on Tuesday morning.

Boehner directed the blame for the predicament at the Senate, where Republicans were unable to break a Democratic filibuster and insert the immigration restrictions into a funding bill. "The House has done its job by passing legislation to fund DHS and block the president's executive actions on immigration," the speaker said, according to the source. "Unfortunately, the fight was never won in the other chamber. Democrats stayed united and blocked our bill, and our Republican colleagues in the Senate never found a way to win this fight."

Republicans in the Senate hoped to bring their chamber's "clean" funding bill into conference negotiations with the House, where lawmakers would have had an opportunity to insert immigration restrictions into the proposal. That measure was denied the 60 votes needed to proceed by a unified 46-member Democratic caucus.

The speaker also took a swipe at conservatives in his own caucus, 52 of whom bucked party leaders last Friday to defeat a continuing resolution (CR) funding DHS for three weeks. "The three-week CR we offered would have kept this fight going and allowed us to continue to put pressure on Senate Democrats to do the right thing," he said, according to the source. "Unfortunately, that plan was rejected."

The failure of the House's three-week funding bill last Friday cleared the way for lawmakers in both chambers to pass a bill extending DHS funding by one week just minutes before that funding expired.

Boehner is in a precarious position with conservatives in his caucus, who have chafed at some of his previous decisions as speaker. Over two dozen House Republicans voted against reinstalling Boehner as speaker when the new Congress began in January, and many believe this latest spat will only deepen the tension between the two camps.

Despite the outcome of the congressional fight over Mr. Obama's immigration policies, Boehner reminded his caucus before Tuesday's vote that not all is lost, noting a federal judge's decision last week to halt implementation of the president's plan. The administration has appealed the ruling.

"The good news is that the president's executive action has been stopped, for now," Boehner said at the House GOP meeting, according to the source present. "This matter will continue to be litigated in the courts, where we have our best chance of winning this fight."

Republicans chose the DHS funding fight to take a stand on immigration because the department is responsible for enforcing U.S. immigration laws. While the rest of the government was funded through September in a spending deal reached last December, DHS funding was scheduled to expire in February so Republicans could take another crack at the president's immigration policies after assuming full control of Congress in January.

House Votes To Fund Department Of Homeland Security Though September