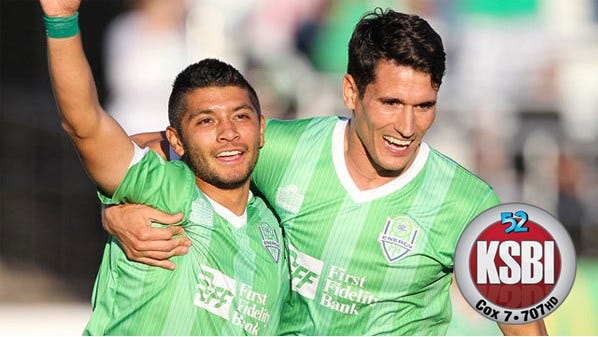 Energy FC announced today a partnership with Griffin Communications to televise a minimum of 15 matches during the 2016 season on KSBI/Channel 52.

The partnership provides Energy FC the opportunity to televise all 15 home matches from historic Taft Stadium in the heart of Oklahoma City on KSBI.  In addition, Energy FC and KSBI are working with their in-state rival, the Tulsa Roughnecks FC, to air the Black Gold Derby matches from ONEOK Field in Tulsa.

“When Tim (McLaughlin) and I discussed the opportunity to air our games on KSBI with Griffin Communications, we were ecstatic,” said Energy FC co-owner Bob Funk Jr.  “Griffin is well respected in the state of Oklahoma and we’re proud to work with them to broadcast Energy Soccer to more fans across our city.”

“As Oklahoma’s only locally-owned television group, we are constantly on the lookout for quality, local programming that showcases our state,” said Griffin Communications Chairman & CEO David F. Griffin.  “We are pleased to be able to broadcast the OKC Energy games on KSBI. The club has shown remarkable growth in their two short years playing in Oklahoma City and has proven that there is an appetite for professional soccer in Oklahoma.”

KSBI is owned by Griffin Communications L.L.C.. Griffin is an Oklahoma-owned, multimedia company, providing news and information content to Oklahomans across the state. Other holdings include KWTV/News 9 in Oklahoma City and KOTV/News On 6 and KQCW/The Tulsa CW in Tulsa. Griffin’s holdings also include News9.com, NewsOn6.com, Griffin Outdoor and the Radio Oklahoma Network, representing 40+ affiliates across Oklahoma.

Energy FC kicks off their season at home March 26 against the Colorado Springs Switchbacks FC at 7 p.m.  Tickets are available by calling 235-KICK or by visiting EnergyFC.com.