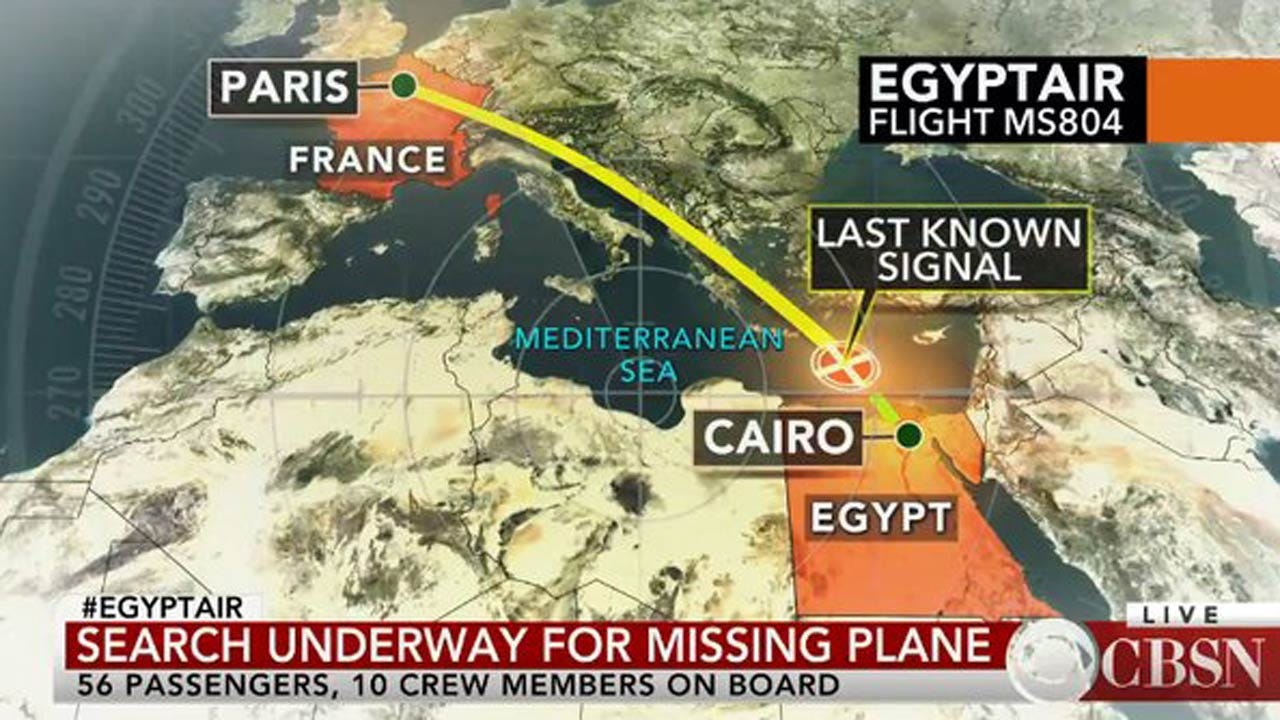 An EgyptAir flight from Paris to Cairo carrying 66 people disappeared from radar early Thursday morning over the Mediterranean Sea, and Egyptian and Greek officials said it had crashed and a search was underway for debris -- with some pieces possibly spotted.

Egypt's Aviation Minister Sherif Fathy said at a news conference in Cairo that there was a "stronger" likelihood that terrorist action brought the missing plane down than a technical failure.

The director of Greece's Civil Aviation Authority said air traffic controllers were in contact with the pilot of EgyptAir Flight 804, an Airbus A320, as it passed through Greek airspace.

"The pilot was in good spirits and thanked the controller in Greek," the authority said of the last communication with the flight crew, at approximately 2:48 a.m. local time (7:48 p.m. Wednesday, Eastern time), as the jet was cleared to leave Greek airspace.

The authority's director, Constantine Lyzerakos, told private Antenna television that controllers tried to make contact with the pilot again 10 miles before he exited the Greek Flight Information Range (FIR), but the pilot did not respond.

Lyzerakos said controllers continued trying to contact the pilot for about 10 minutes, until 3:39 a.m. Greek time (8:39 p.m. Wednesday, Eastern time) when the plane disappeared from the radar in Egyptian airspace. EgyptAir said it disappeared about 175 miles off Egypt's coast, north of the Mediterranean port city of Alexandria.

A Greek official said the aircraft made sudden "swerves" off its charted course as it plunged and then disappeared from radar.

The Reuters news agency cites a Greek defense ministry source as saying authorities were investigating an account from the captain of a merchant ship who reported a "flame in the sky" some 130 nautical miles south of the island of Karpathos.

Greece's Defense Ministry said in a statement that it had sent two military aircraft and a Navy frigate to the area south of Karpathos to join the search, and that two Super Puma helicopters based on the island were also ready to help, according to French news agency AFP.

A Greek military official said an Egyptian search plane had located two orange items believed to be from the missing flight. The official said the items were found 230 miles south-southeast of the island of Crete, but still within the Egyptian air traffic control area. One of the items was oblong, said the official, who spoke on condition of anonymity in accordance with regulations.

Law enforcement sources also told CBS News the FBI would offer assistance to investigators in the crash. CBS News correspondent Jeff Pegues says the FBI is known to have some of the most skilled bomb technicians on the planet, and their dive teams and evidence response teams are also among the best.

"Right now we have to find where this aircraft is," former NTSB chairman Mark Rosenker told CBS News, explaining that once that was accomplished, the focus of the search would turn quickly to the plane's flight data and cockpit voice recorders -- the so-called "black boxes." Those instruments should contain information to help investigators determine what brought the plane down.

Rosenker, a CBS News transportation analyst, noted that whatever caused the plane to disappear happened at cruising altitude -- about 37,000 feet, and "very, very few accidents occur at that altitude, about 10 percent."

Rosenker described the Airbus jets, which are used widely across the globe, as "solid aircraft, workhorses in the industry."

Heading into a crisis meeting at the airport in Cairo on Thursday, Egyptian Prime Minister Sherif Ismail was asked whether it was possible to rule out a terrorist attack.

"We can neither rule out or confirm any hypothesis at the moment," said Ismail. "We must first complete all the search procedures."

The Airbus A320 in question flew earlier Wednesday from Cairo to Paris, and before that also made a stop in Tunis, Tunisia. The airline said there were three security personnel on the flight when it left Paris.

CBS News correspondent Mark Phillips notes that French authorities have tightened airline security since the terrorist attacks on Paris. Not only passengers, but anyone who gets near a plane in the French capital goes through screening, and people have been dismissed for security reasons.

The big question now, says Phillips, is whether somewhere -- be it in France, Egypt or Tunisia, security measures failed.

CBS News aviation consultant and former "Miracle on the Hudson" pilot, Capt. Chesley "Sully" Sullenberger, said the lack of a distress call from the flight crew suggests a likely catastrophe in the air.

"Something must have happened that either prevented the pilots from communicating, or made them so busy that they couldn't get to a priority as low as talking on the radio. They were trying to maintain control of the airplane or fight a sudden catastrophic emergency, for example," Sullenberger told "CBS This Morning."

Egyptian armed forces were searching for the plane, which was carrying 56 passengers, including one child and two babies, and 10 crew. The pilot had 6,000 flight hours. Earlier, the airline said 69 people were on board.

EgyptAir said there were 15 French passengers, 30 Egyptians, one Briton, two Iraqis, one Kuwaiti, one Saudi, one Sudanese, one Chadian, one Portuguese, one Algerian and one Canadian on the flight.

Airbus said the missing Egyptian plane was delivered to EgyptAir in 2003 and had logged 48,000 flight hours. The European plane-maker said in a statement Thursday that the plane had engines made by Swiss-based engine consortium IAE, and had the serial number 2088.

Airbus said it was ready to help authorities investigating the disappearance and said "our concerns go out to all those affected."

Family members of passengers on board the missing flight arrived at the airports in both Cairo and Paris.

Reporters gathered in front of the small, empty EgyptAir counter at Terminal 1 of Charles de Gaulle Airport. Airport staff said EgyptAir staff were on their way.

France remains under a state of emergency after Islamic extremist attacks killed 130 people in November. The Islamic State of Iraq and Syria (ISIS) continues to threaten France and Egypt, where it is known to operate in the volatile Sinai Peninsula.

Greece joined the search and rescue operation for the EgyptAir flight with two aircraft: one C-130 and one early warning aircraft, officials at the Hellenic National Defense General Staff said. They said one frigate was also heading to the area, and helicopters are on standby on the southern island of Karpathos for potential rescue or recovery operations.

An EgyptAir plane was hijacked and diverted to Cyprus in March. A man who admitted to the hijacking and is described by Cypriot authorities as "psychologically unstable" is in custody in Cyprus.

The incident renewed security concerns months after a Russian Metrojet passenger plane was blown out of the sky over the Sinai Peninsula. The Russian plane crashed in Sinai on Oct. 31, killing all 224 people on board. Moscow said it was brought down by an explosive device, and the local ISIS branch claimed responsibility for planting it.

In 1999, EgyptAir Flight 1990 crashed into the Atlantic Ocean near the Massachusetts island of Nantucket, killing all 217 people aboard, U.S. investigators filed a final report that concluded its co-pilot switched off the autopilot and pointed the Boeing 767 downward. But Egyptian officials rejected the notion of suicide altogether, insisting some mechanical reason caused the crash.