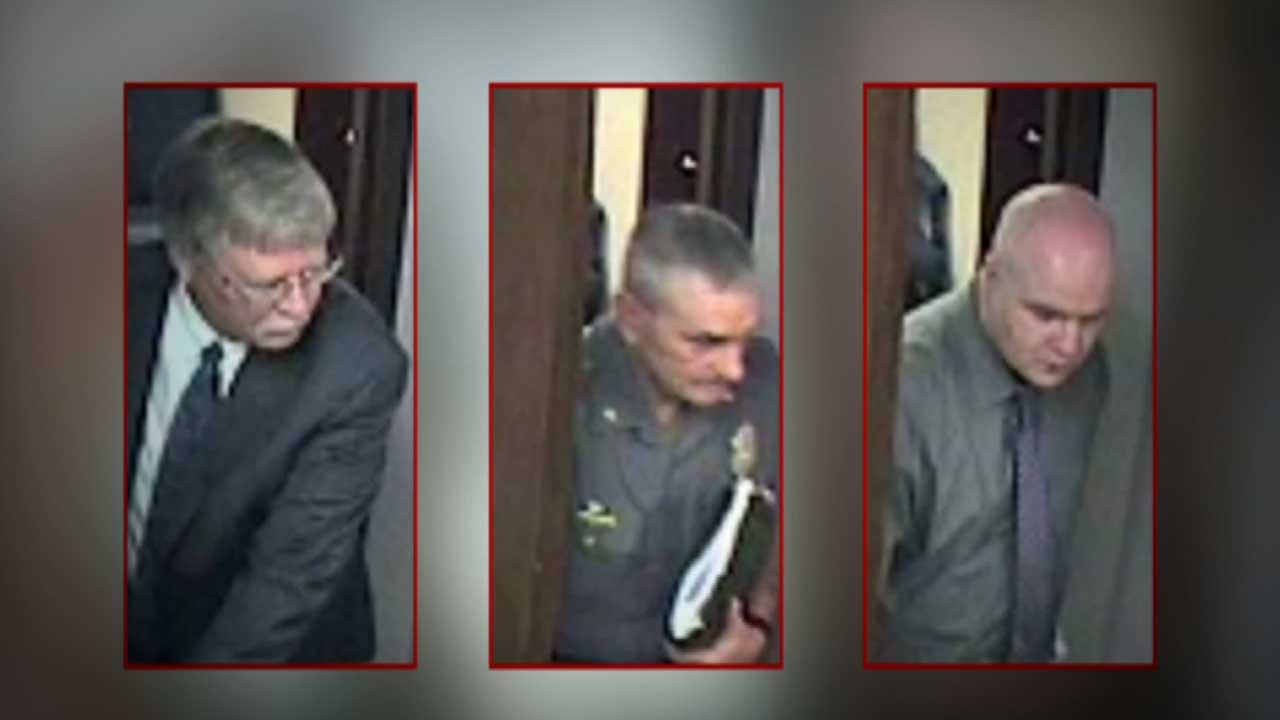 Surveillance video sheds some light on the secret hearings in the appeal of former Oklahoma City police officer Daniel Holtzclaw.

Holtzclaw was convicted of sexually assaulting women while on duty.

He is currently serving a 263 year sentence at an unknown prison.

From his cell, Holtzclaw responded to the unusual, closed hearing that was held in district court on June 26 and 27.

Holtzclaw and his defense were not privy to the information discussed during the two-day secret hearing in Judge Timothy Henderson's courtroom.

The hearing occurred a month after the Oklahoma Court of Criminal Appeals sent the case back to Oklahoma County District Court for an undisclosed reason.

The reason for the case being returned to the trial court is unknown due to documents being filed under seal.

However, surveillance cameras captured someone posting a notice outside of Judge Timothy Henderson's courtroom.

She could be seen covering the windows ahead of the proceedings.

Surveillance cameras also captured a team of prosecutors, including the lead prosecutor in Holtzclaw's trial, arriving shortly before 9 a.m.

Holtzclaw and his defense were not privy to the information discussed in the hearing.

By phone, Holtzclaw reacted to the secrecy surrounding the case:

I'm extremely upset about it because my trial was unfair and biased, and still to this day it is that way. There were two full days where the secret hearing was going on and my lawyer wasn't allowed to be there, let alone know about it. Also, the lead prosecutor in my trial who lied gets to weigh in on a response  or  have his input. How is that in any way, shape or form fair to me? Not only should I be able to know what is going on, but the public should know, as well. If I was a hardworking taxpayer in Oklahoma, I would be outraged. I would be knocking on doors and trying to find an answer. More importantly for the audience out there listening, this could happen to you and my case could happen to you.

A court order is preventing prosecutors, the attorney general's office, and other involved agencies from commenting on the developments in the case.

However, the video shows a civil attorney for the City of Oklahoma City, Oklahoma City police Deputy Chief Johnny Kulman, and the police department's forensic lab supervisor Campbell Ruddock were called for the proceedings.

"I've never seen anything like this so it is something significant," said Oklahoma City defense attorney Scott Adams.

Adams represented Holtzclaw at trial and said, based on the people present for the hearing, it would be reasonable to assume it had something to do with the forensic lab that provided DNA evidence in the case.

But he also says he can't fathom a scenario, whether it involves the lab or not, that deserves this level of secrecy.

Now that the hearing has seemingly concluded, the judge should make a ruling and send it to the appeals court for review.