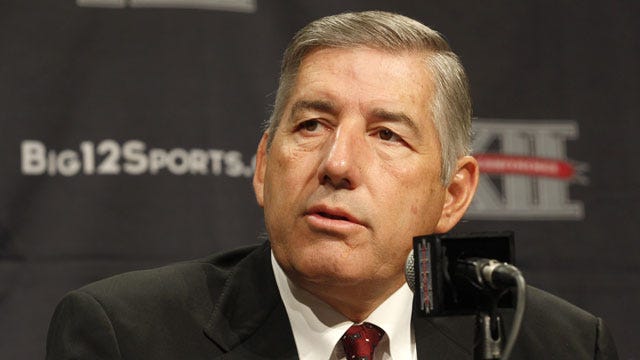 UCF is celebrating its self-proclaimed national championship with a parade this weekend, but don't count on Big 12 commissioner Bob Bowlsby showing up for the festivities.

While many people are of the opinion that it isn't right that a UCF team that finished 13-0 -- with a win over an Auburn team that beat both Alabama and Georgia -- doesn't have a shot to play for the national title, Bowlsby isn't one of them. The Big 12 commissioner believes the system is fair because UCF wouldn't be in the same position had it played in a Power Five conference.

"It's fair because playing in the American Athletic is not the same as playing in the Big Ten or the SEC or the Big 12, it's just not," Bowlsby said. "They have some big games, but they don't have an Iowa State who can beat a second-ranked Oklahoma. The depth of those leagues and the quality at the top, getting ready for one game against Auburn, that's a lot different than playing Auburn every week.

"TCU, if TCU and UCF played 10 times, I defy anybody to convince me that UCF would win the majority of the games. Of course, I've only been looking at it for 35 years."

Yes, I too was shocked to find that the commissioner of a Power Five conference believes that the playoff system designed by the Power Five conferences is fair. As for whether the situation is fair or not, I have to agree with UCF's side here. It's not fair. Of course, not much in the sport of college football has ever been fair.

There are haves, and there are have-nots. This has always been the case, and the truth of the matter is that when your sport has 130 teams that can only play one game a week, there's no logical or fair way to determine your national champion.

Of course, I also agree with Bowlsby's assertion that UCF wouldn't go undefeated if it played in a Power Five conference. That's not a knock on UCF in any way; it's just a logical conclusion to come to considering there hasn't been a Power Five team to finish the regular season undefeated since Florida State went 13-0 in 2014.

UCF is the first Group of 5 team to finish the regular season undefeated since, well, since Western Michigan did it last season. The difference between the Broncos and Knights is that the Broncos lost in their New Year's Six game.