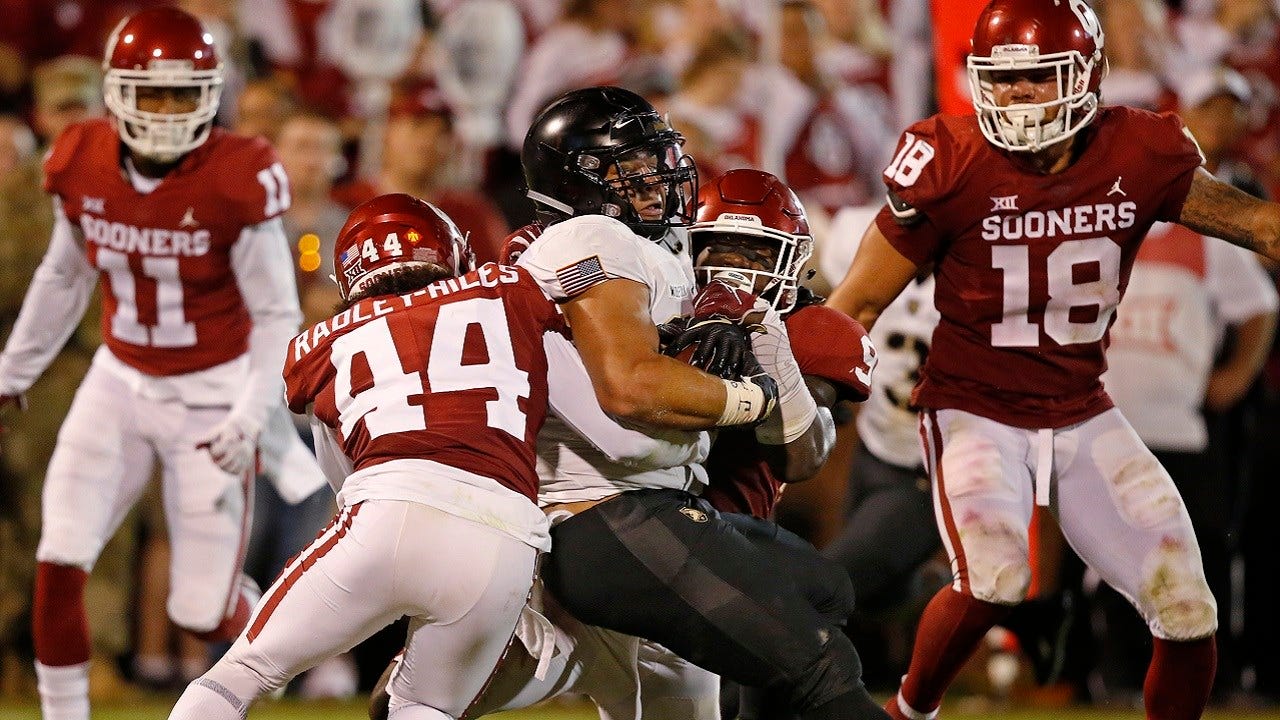 The numbers. Those little digits that can tell the story or not tell us anything. But when it comes to State Enemy Number One – the state of Oklahoma’s defense – an avalanche of numbers say the same thing. The gap between the quality of this Sooner offense-for-the-ages and this defective defense is wider than the gap between the philosophical differences in our political parties. As in historical. Every set of numbers proves it.

Stunning, I know. The good news is that this is coming to an end soon. But that’s after Morgantown and perhaps Jerry World.

Despite the numbers, the Sooners are favored to win on Black Friday on Mountaineer Field at Milan Puskar Stadium. The Big Red and West Virginia Mountaineers face off in a boat race with the winner getting shot at Texas in a Big 12 Championship Game in which Oklahoma is a tidy 8-1. Not bad seeing the title game didn’t occur from 2011-16.

Contrary to the defensive numbers, lots of facts support the Sooners. OU has not lost a true road game in over 4 years, or 1,511 days ago. 19 consecutive wins wearing white, including 17 straight Big 12 road games. Being Road Warriors means something – to the Sooners and its foes. Six wins and no losses to the ‘Neers since they joined the league. And 16 straight in November.

It was going to be impossible for me to not pick WVa to win …. until they flinched in Stillwater last Saturday. Yes, it was on the road, but a 5-loss Cowboy team made impressive stops which were complimented with significant success on offense – without superstar RB Justice Hill, but with ugly turnovers.  And while Taylor “Corn” Cornelius played great, Kyler Murray is twice as effective, as QB1 and his offense are established as once-in-a-generation good – which makes it arguably raises the bar of ‘once-in-generation good OU offenses for the third time in four years.

But can Lincoln Riley’s second Sooner team take advantage of an offense loaded with an elite line, multiple future NFL receivers – including potential first-round pick Hollywood Brown, productive runner(s), yet another Heisman-worthy man-under center, and the nation’s most extraordinary, hottest, and productive offensive coach/game-planner/play designer/play caller in college football? Or are the defensive deficiencies just too substantial to overcome?

A few specific thoughts on this inexplicable defensive play:

- An admitted lack of effort is unacceptable and is at the core of the problems. To not have more pride is mind-boggling. Pitiful, really. To be part of a program that’s won championship upon championship solidified with tenacious defense and admit to needing to play harder is beyond startling.

- There have consistently been good players who somehow plateau out or regress. That’ll change very soon. But it’s reality now.

- The impact of key/starting players being injured and either unavailable or playing well below their capabilities has been a big factor down the stretch. The loss of disruptive nose guard Neville Gallimore – questionable for Friday – has been significant. Safeties Kahlil Haughton and recently Justin Broiles – questionable or unlikely to play Friday. Several others, including the loss of starting OLB Mark Jackson, only adds to the quality of play. There’s a chance some of a lengthy list of contributors/starters will get some time in Morgantown, but they must be cleared by the docs/trainers, and you plan to need them eight days later in a championship game

- The updates on Trey Sermon make it impossible for OU’s No. 1 back to be one hundred percent; likely much less and a decent chance he doesn’t play. While Kennedy Brooks has been invaluably productive, the fact that OU is down to one healthy scholarship back is as scary as it is unbelievable. With all due respect to Brooks, compare the RB situation to what OU’s had:

A projected first-round pick in Rodney Anderson – out for the season. Current Redskin Samaje Perine. And an under-appreciated but fabulously gifted Joe Mixon. Quite the drop off. If Brooks is injured or needs a blow or two, OU will do a combination of things. Run a lot of ‘empty’ backfield, utilize a combination of Hollywood Brown, Cee Dee Lamb (and other receivers), H/TE types, and go play-action a lot. Less than ideal in any game, much less a do-or-die game.

-… and then there’s Bookie. A starter from Day 1, the diminutive five-star DB is at least finally playing the nickel – the only back-end position many believe he’s currently capable of playing at a winning level. At 5-9, give or take some an inch, 44 B is undoubtedly a valuable piece of this and future OU secondaries. His positive energy is both legendary and much-needed right now. But to be fair, his play has not been at a high level, or the level he and everyone else expected. Tackling, coverage and forcing turnovers are musts for a guy in his position. But it’s unfair to others on the defense to not point out that he’s not played well in those essential ’s not fared categories. So far.

Oklahoma is going to need turnovers from Will Grier and this outstanding two-dimensional offense. So far, the Sooners have flunked the test of forcing them. The best way to produce turnovers is to put more pressure on the QB – difficult again in this game with quick throws – and to basically take more gambles. I hope and expect more of that Friday. Successful blitzing and bringing more pressure are great ways to both make plays and to produce an energy and excitement that is essential to any successful defense. And …. why not? What’s happening now isn’t working.

- I predicted a 10-2 regular season. My head tells me West Virginia will win. It’s felt that way a while. Until Stillwater. That loss has to put doubts in the minds of WVa. Grier is outstanding and an NFL QB. But Kyler Murray is better. So, head says one thing and heart says another. Until all these winning streaks end – most importantly, until WVa beats the Sooners, I can’t take them. 55-52 Sooners. Followed likely by a narrative of condemnation of bad defense, exactly the opposite from the MNF narrative of fantastic offensive in the scoring festival put on by KC and LAR.

Alex Cameron If you watched Tuesday night's presidential debate, you probably won't soon forget it. At times chaotic, filled with interruptions, personal attacks, and just very unlike debates of the past.
View More Stories