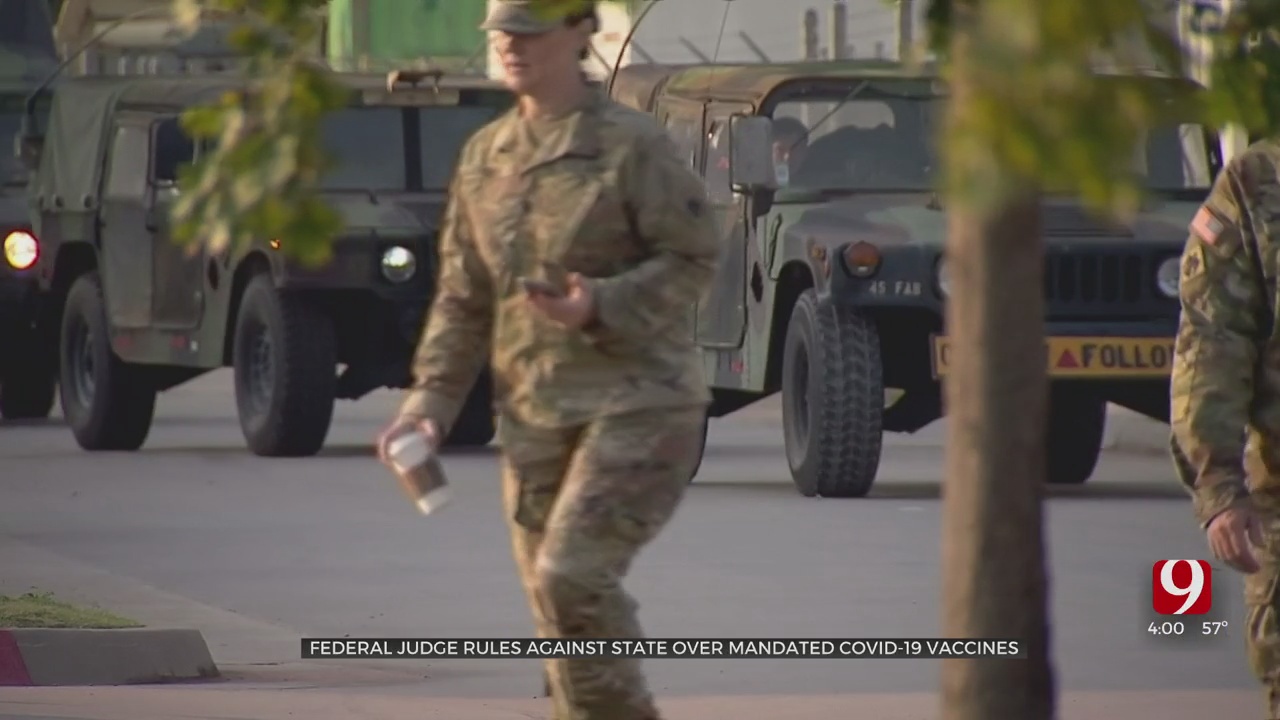 The Oklahoma National Guard said it will continue following the governor’s order to not require COVID-19 vaccines for troops, despite a federal judge in Oklahoma City refusing to block a federal mandate for the armed forces.

It was a scathing opinion from Federal District Judge Stephen Friot. Not only finding the state’s case against the federal mandate is without merit, Friot noted issues with the way the case was filed and cast doubt on the Oklahoma Guard’s leadership at its highest levels.

“The court is required to decide this case on the basis of federal law, not common sense. But, either way, the result would be the same,” Friot wrote in his 29-page opinion.

Friot denied an order that would have halted the mandate while the case moves through the court.

“It would be inappropriate to weigh-in on ongoing litigation. We continue to follow the (Governor’s) order and will continue to do so until a final legal determination is made,” a spokeswoman for the Oklahoma National Guard said in an email.

In November, Adj. Gen. Thomas Mancino announced Gov. Kevin Stitt had given order that soldiers and airmen in the Oklahoma National Guard are relieved from the vaccine requirement.

The judge, the father of an active duty airman, noted several times that vaccine requirements for the military are nothing new, writing they “date back as far as General George Washington’s mandate that troops in the Continental Army be inoculated against smallpox.”

He said the court would be “hard-put” to find it in the public’s interest to prohibit the mandate of an FDA approved vaccine he called “remarkably effective.”

In a statement, the Oklahoma Attorney General John O’Connor’s office said they hope the Biden administration will review all exemptions and religious accommodations requested.

“We will not be surprised if the President’s vaccine mandate actually reduces the nation’s military readiness instead of promoting it. We are analyzing the State’s response to this decision,” the attorney general’s office statement said.

The judge sympathized with the unvaccinated and wrote, “the individual non-compliant Guard members did not have the benefit of well-informed leadership at the highest level of the Oklahoma Guard.”

The judge noted the state’s lawsuit originally focused on an executive order that applies to only federal civilian employees, not service members. The state amended their complaint Monday, 25 days after filing the lawsuit.

Friot also noted anonymous plaintiffs are rarely allowed and only permitted after approved by the judge, something the state did not seek until Tuesday.

“In the meantime, the court lacks jurisdiction to grant relief to the unnamed plaintiffs,” Friot wrote.

The deadline for guardsmen to be vaccinated is Friday, December 31. Friot urged the federal government to give unvaccinated soldiers and airmen a grace period before taking action to end their careers.