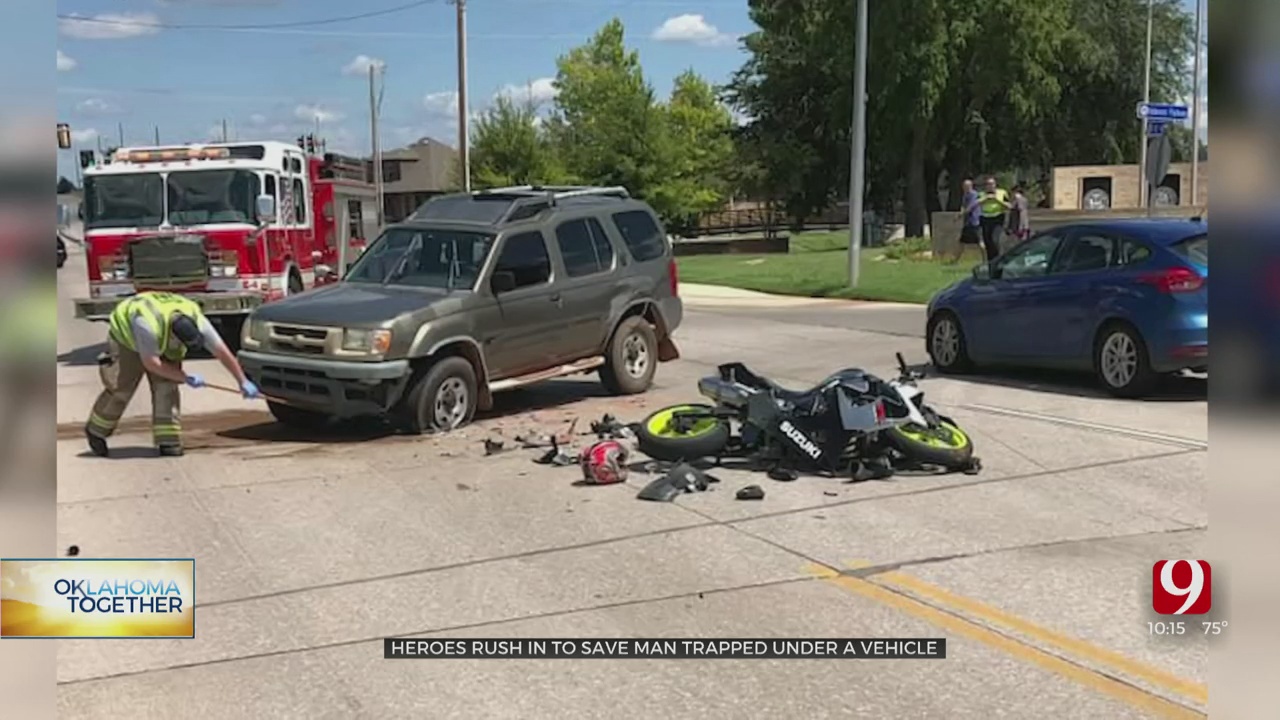 Good Samaritans in Moore rushed to the rescue of a motorcyclist that was pinned underneath an SUV this weekend.

Kris Nance, 40, was riding his motorcycle on 4th Street in front of Veterans Memorial Park Saturday when he said an SUV turned in front of him causing the crash.

Nance was pinned under the SUV for over 10 minutes.

“I don’t remember sliding under the vehicle,” said Nance. “I just remember hitting the brakes and almost falling off the bike and waking up under the bike with my head turned and my hands somewhere. I couldn’t move, I thought I was paralyzed.”

Nance suffered a great deal of road rash all over his body, injuries to his ribs and burns from hot antifreeze leaking from the SUV.

Nance said he was wearing some gear and a helmet.

“I screamed until I couldn’t breathe anymore,” said Nance. “I started getting dizzy and I thought that was it, I closed my eyes and was like man, if this was it, I’ll race you there.”

Miranda Matlick’s boyfriend, Ben Brant, used a 2 x 4 to help free Nance who was able to crawl out at the time.

“When you see somebody distressed like that, his legs were wiggling underneath the vehicle, he was hollering and screaming in pain so that just, adrenaline just kicks in and gives you a lot more horsepower,” said Brant.

Matlick happens to be a nurse, in the right place at the right time.

“I was not expecting a person to be alive,” said Matlick. “If so, like super hurt. He was lying face down and at first he wasn’t moving and as we got closer he started panicking. I just kind of reached down and touched him and introduced myself and let him know I was a nurse. (I told him) we needed him to try to hold still so we could get this car off of him safely.

Russell lost a player on his team on February 3 when Max Townsend, 57, allegedly drove into a group of cross country runners near Moore High School.

“There is no way I can go around that situation, I have to stop and help and do what I can,” said Russell. “Our students did that that day during the tragedy, they stopped, and they helped their teammates in an instant. It is the culture at Moore High, it’s what we do. If somebody is hurting, you go help them.”

Nance told News 9 his son wants a motorcycle. He said that is not happening.

Following the crash, Nance said he’ll get back to riding his motorcycle once again.