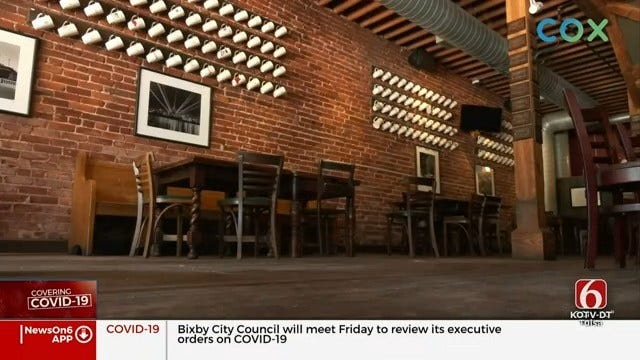 Tulsa Mayor G.T. Bynum is expected to share his plans Friday on when and how the city will re-open restaurants and other businesses.

As of right now, Tulsa’s Safer at Home order is in effect through April 30th.

The McNellie's Group said it is not going to make a knee jerk reaction, adding it does not think there would be a big financial benefit to opening its restaurants up right away.

The restaurant group owns Fassler Hall, Dust Bowl, Dilly Diner and Yokazuna along with several others.

Employees at McNellie’s are starting to move tables further apart, just to get an idea of what things might look like in the future.

Before anyone steps inside to eat, Founder and CEO of the McNellie's Group Elliot Nelson said a lot needs to be considered.

"We don't want to reopen too soon, because if we reopen and then shut and it goes back and forth for the course of a year, it's gonna be almost impossible to survive,” he said.

He wants to see official guidance on the best way to reopen during the pandemic.

"I think for us, we'd really like to see something come from the CDC that says, here's it. Here are the ten bullet points you need to hit,” Nelson said. “Whether that's everyone wears masks, everybody gets temped before they go in. Here's the exact sanitizers we want you to use on your tables. We really want that guidance."

Oklahoma Restaurant Association President and CEO Jim Hopper said his organization has more than 200 members in the Tulsa area.

"They're more than eager to get back up and running,” he said.

He said that's going to take time, and will come with the challenge of creating confidence for customers and employees.

"A lot of restaurants would say that they need 10-14 days to be back with the deep cleaning, with the retraining and with the supply chain,” Hopper said.

"More than anything, if we could ask one thing of Tulsans, it's just please be patient,” Nelson said.

Another challenge restaurants face is hiring back their employees, who may be making more on unemployment right now, than they would if they went back to work.

OSU Researchers Test Potential Use Of Drones For Medical Response