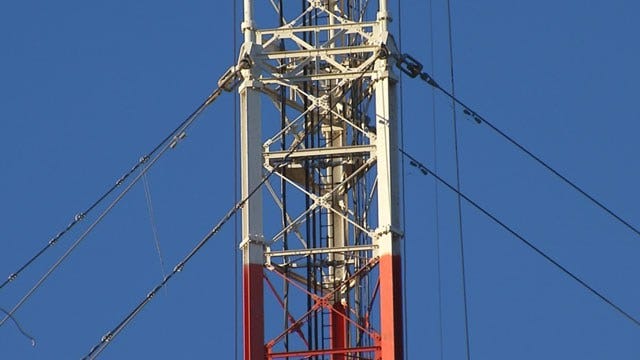 An important era in Oklahoma history moved closer to its end. The Griffin Tower, that transmitted News 9's signal across Oklahoma since the mid-1950's will be fully dismantled by this time next month.

7/28/2014 Related Story: End of An Era: KWTV To Take Down Historic Broadcast Tower

The News 9 tower, at one time, was the tallest man-made structure in the world. At nearly 1,600 feet, it was 300 feet taller than the Empire State Building. However, the tower hasn't transmitted anything for about five years, because of the digital conversion.

Griffin Communications' Tony Welch spearheaded the tower demolition project. “We have not received any calls asking us not to take it down,” he said. “But more inquiries of what's going on over there.”

The massive amount of metal that made up the tower will be recycled. A Dallas company has been taking down the tower since early October.