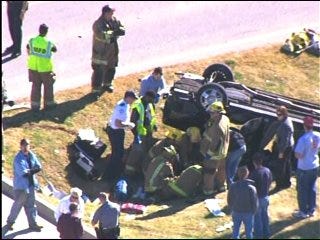 EDMOND, Okla. -- Multiple people are injured after being trapped in a vehicle on the northwest side of the city after a collision with a motorhome this afternoon, police said.

Emergency crews rescued three victims, who were trapped in an overturned vehicle. The three victims are injured and were transported to an area hostpital. One of the victims is critically injured.

Medi-flight and fire officials were on the scene.