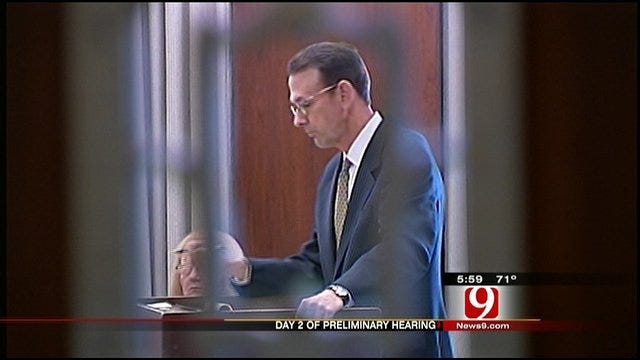 OKLAHOMA CITY -- The bribery hearing against two state lawmakers is now in day two. Randy Terrill and Debbe Leftwich are accused of trying to create a spot at the medical examiner's office in return for a senate seat.

A judge will decide if State Representative Randy Terrill and former State Senator Debbe Leftwich will go to trial on federal bribery charges. They're accused of trying to create a spot at the medical examiner's office for Leftwich, in return for her not running for re-election.

State Representative Mike Christian testified late in the day that the job of transitional coordinator at the ME's office was brought up during a joint committee hearing of public safety agencies in April of 2010. Christian, under cross examination, told the court former ME Chief Administrative Officer Tom Jordan told lawmakers at that hearing that from his experience, a transition officer would be critical during the reform process of the ME's office. Christian said Jordan advocated that he needed that position created. Randy Terrill was the chairman of that hearing.

It's alleged in this case that the position was being created for Leftwich, so Christian could run for her Senate seat without facing an incumbent. Under questions from the district attorney's office, Christian said he began to hear rumors in March or April of last year that Leftwich might not run. He was asked about a party a few weeks before the end of the legislative session in May of 2010. Christian said he talked to several people about the rumors that Leftwich might leave the Senate to return to the ME's office. Christian told the court that in the next day or two, Terrill approached him on the 4th floor of the capitol and told him he was relaying a message from Senator Leftwich to keep quiet. He told attorneys he took that to mean what he was talking about at the party the previous days. Christian testified that a day or two after his encounter with Terrill, he was approached by Leftwich on the fifth floor of the capitol and was told he was going to need to be quiet or he was going to get her into trouble.

On cross examination, Christian told defense attorneys that he had too much to drink at that party and shouldn't have said anything. He admitted that Terrill was correct in telling him he should not have been running his mouth about a senior senator's election plans. And when asked if he could have been mistaken by Leftwich's meaning of keeping quiet, Christian told the court it was his understanding that she wanted him to shut up or she would be in trouble with the Democratic leadership. And it was up to her to let them know she wasn't going to run for re-election when she was good and ready.

Christian said he was not aware of any alleged plot to get Leftwich the ME's job. He was not part of any such plot and had not heard any conversation about a plot. He also told the court that he met with then Senate Pro Tem Glenn Coffee and a Republican strategist in February of 2010 and decided at that time, he would run against Leftwich no matter what she decided to do.

Earlier in the day, State Treasurer Ken Miller and State Senator Patrick Anderson took the stand. Miller was the State House Appropriations Committee chairman during the 2010 legislative session. The key portion of his testimony came in response to a prosecution question about money being transferred from a non-appropriation fund to a "shell" appropriations bill requested by Terrill to pay for the new transition position. Miller told the court that, in his opinion, once that money was moved from the fund into a shell bill, then it became appropriated dollars and would prevent Leftwich from taking the job under the Oklahoma Constitution which requires lawmakers to wait two years before accepting a job with a state agency in which the salary is paid for with appropriated funds.

Anderson testified that on April 19, 2010, he and Leftwich were talking about where they were the day of the Oklahoma City bombing. Anderson told the court that Leftwich told him she was at the ME's office and she was now working with senate leadership to return to the ME's office, but they couldn't talk about that. Anderson testified that it struck him as odd that Republican leadership was working with a Democrat on a job like that. He said no other details were ever discussed.

The morning session was devoted to legislative procedure. Senate staffer Jennifer Mullens was on the stand for several hours. She was the staffer that wrote the language into Senate Bill 738 that created the transitional position at the ME's office. Mullens told the court of a meeting attended by State Senator Anthony Sykes, Terrill, and Leftwich. She said that in her six years of writing more than 600 bills that she hardly ever saw the two chairs of a House and Senate committee get together in such a meeting. She testified it was highly unusual for the House chair to discuss language in a senate bill. Mullens told attorneys that Terrill was very specific about the language and dictated every detail.

However, on cross examination, she said Senator Sykes showed no objection to the language being added and she testified that there was nothing wrong with behind the scenes, closed door deal making on bills. Mullens told the court that she never suspected a crime was being committed so she didn't report the meeting to law enforcement.

Following her testimony, Terrill's attorney, Steven Jones, said this preliminary hearing has demonstrated exactly what he has been saying, that this is a political chase and an abuse of separation of powers.

"There's no crime here." claimed Jones. "This is a legislative matter involving an autopsy, if you will, of the efforts of the house and senate leadership to pass a bill that would be acceptable to correct the deficiencies in the Medical Examiner's Office. The very first person that would complain if one of his assistants was being called down to the capitol for a public legislative hearing to explain why he did or did not prosecute a certain case or secure a certain sentence would be the district attorney of Oklahoma County. And it would be improper for the legislature to do that and this is improper."

The DA plans to call four to six more witnesses on Wednesday before the defense gets their chance.

William Blanchette An Uber driver charged with murder is back in jail, after just last week the Saudi Arabian government paid his bail to get out.
View More Stories

Murder-Suicide Witness Talked With Suspect On Phone During Standoff

Ashlyn Brothers The friend of a man who police said murdered his neighbor then killed himself after a long standoff with police had talked with the suspect in the midst of the ordeal.
View More Stories