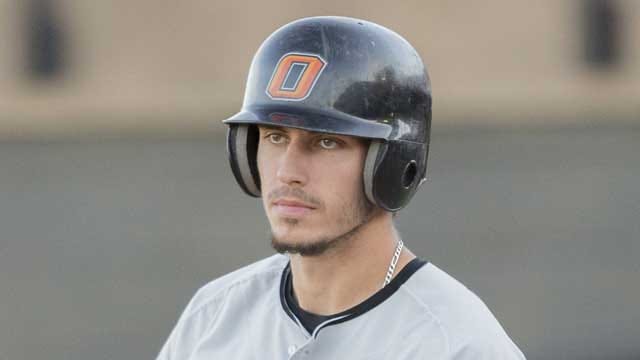 Oklahoma State's Tanner Krietemeier was named the first Big 12 Conference Newcomer of the Week for the 2013 season.

A junior from Castle Rock, Colo., Krietemeier led OSU to a series win at No. 21 New Mexico on opening weekend. The switch-hitting junior was 6-for-11 (.545) against the Lobos with three RBIs, three runs and a pair of walks and was the only Cowboy to hit safely in all three games.

Krietemeier's clutch hitting was vital to OSU winning the first two games of the series. In Friday's opener, he came off the bench to pinch hit in the ninth inning with the game tied 2-2, and on the first pitch he saw delivered an RBI single to plate the go-ahead run.

On Saturday, Krietemeier was 2-for-6 with two RBIs and two runs in OSU's comeback 15-14 win in 13 innings, a game that saw the Cowboys erase an eight-run deficit in the eighth and ninth frames. In the ninth, with OSU trailing 14-12 and down to its final out, Krietemeier fell behind in the count 0-2 but then came up clutch once again with a two-RBI single to tie the game.

In Sunday's series finale, Krietemeier was 3-for-4, collecting three of OSU's four hits in a losing effort.