Countdown To The Playoffs: Thunder Pushing For No. 1; Mavs Are Back 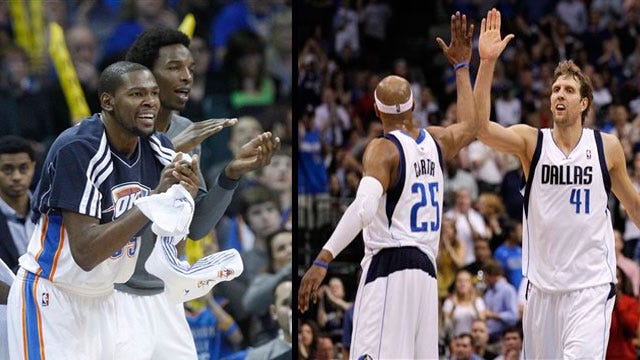 With just over 10 games remaining in the NBA's regular season, the Spurs continue to maintain its slight advantage over Oklahoma City for the No. 1 seed in the West.

Meanwhile at the back of the race, the Lakers' grip on the No. 8 spot isn't nearly as tight as the Mavericks gained two games on them last week alone.

Every Monday, we'll have an updated look at who's doing what as we count down to the playoffs. Here's what's coming up this week around the Western Conference.

If you're a Spurs season-ticket holder, this is the week you've been waiting for. This is as brutal a 3-game stretch as you'll ever see, but fortunately for the Spurs, they're all home games. This week will be key if San Antonio wants to hang on to that No. 1 seed.

The Thunder's one-point, overtime loss in Memphis was tough, but the 10-point home loss to the Nuggets might be more telling. Denver's energy level overwhelmed OKC as the Nuggets secured the season series 3-1. The Thunder might need to grab that No. 1 seed just to avoid Denver in the second round; and with the Spurs' brutal home slate this week, now is the time to strike.

Denver's winning streak is up to 15 games after another 4-0 week. As of Monday, the Nuggets and Heat have won a combined 41 straight games—that's half of one NBA season. The question with Denver, as it is with Miami, is "are they peaking too soon?" In other words, perhaps they've reached their ceiling too soon and there's nowhere to go but down. Only time will tell, but Denver sure looks good right now.

The Clips have already slipped out of the No. 3 spot and now they hit the road for a tough four-game road trip. With that said, it might be a blessing in disguise. If the season ended today, LA would have the four seed and play Memphis in the first round. If they won that, they'd play the Spurs and avoid OKC until the Conference Finals. Why is that important? The Clippers are 2-1 against both the Grizz and Spurs, but 0-3 against the Thunder.

Memphis continues to play great basketball as it put together a 3-1 week highlighted by a home win over the Thunder. The race for home-court in the first round is as close as possible as Denver, LA and Memphis are all tied in the loss column. Games against the likes of Washington and Minnesota are must-wins if the Grizz wants to keep pace.

One thing that is becoming clearer is where Golden State will end up. The Warriors will battle Houston the rest of the way for the No. 6 spot, but they're too far behind Memphis to possibly move up and probably too far ahead of the Lakers to slip to eighth. So here's what it comes down to: they'll play one of the West's top-five squads in the first round, and if they want a chance at survival it needs to be the Clippers. Golden State is a combined 3-10 against the Spurs, Thunder, Grizzlies and Nuggets this season, but boasts a 3-1 mark against the Clips.

This week: vs. Pacers | @Grizzlies | vs. Clippers

Houston is playing its best ball of the season and has a chance to move 10 games above .500 with a win over Indiana Wednesday. The Rockets probably don't have enough defense to win a series against any of the West's top five teams, but if they can enter the playoffs on a hot streak, you never know. Tough slate this week though as the Pacers (43-27) are the easiest opponent on the docket.

The Lakers lost games to the Wizards and Suns last week. Yeah, Kobe's injured. There's still no excuse for that, and it will likely cost LA any chance of escaping the No. 8 seed. The Rockets are playing good ball and the Lakers look content to hold that eight spot and go to battle against either the Spurs or Thunder in the first round. Good luck.

Guess who's back from the dead. Thanks to a 9-4 stretch that's coincided with the Lakers losing to the likes of the Wizards and Suns has placed Dallas right back in the race. Still two games out, it will likely take a strong home stretch to even have a chance. The good news is, if Dallas can hang on against a tough stretch this week, they get a shot at the Lakers in LA next Tuesday. That could be enormous.

The pitiful Jazz has Lost 12 of 15 and appears to be in full-on tanking mode. Nevertheless, their schedule is pretty cushy and they're just two games back, so making the playoffs still isn't out of the realm of possibility.

Countdown To The Playoffs: Thunder Pushing For No. 1; Mavs Are Back