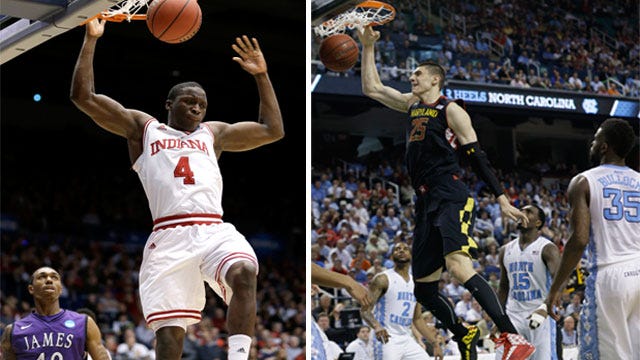 Let's start with the part of the game that you can't teach. Len is a rock-solid 7-foot-1 with a 7-foot-4 wingspan. He was a true center in college and will be in the NBA. He has excellent defensive awareness and great timing on blocking shots. Even with his size, Len has terrific athleticism and moves very well. He added significant weight between his freshman and sophomore seasons in College Park, and became the nation's top rim-protector.

Offensively, he's ahead of the curve for an NBA center. He has a solid array of post moves, can knock down the mid-range jumper and can even elevate and throw down with power.

For someone with Len's offensive skill set, he sure doesn't want to display it all that often. Many times at Maryland, he'd disappear for long stretches on the offensive end. The truth is though, it's not all his fault. Len grew up in the Ukraine and just as in any walk of life, there's a cultural barrier. Some of Len's passiveness could be attributed to him not wanting to step on his teammates' heels after coming to the states. Even more of it can be placed on the Maryland guards who rarely looked for him and instead hogged the ball and jacked up moronic 3-point shots. Len is a tough big who plays hard and doesn't take any mess from anyone, but he's got to learn to make his presence known for the entire game.

He'd be an ideal fit for a Thunder team that desperately needs a center. Kendrick Perkins was historically bad last season, and as of now, he'll be starting again next year. There's really no debating that an upgrade is necessary and Len fits the bill perfectly. He's a better defensive player than Perkins right this second and would add just enough of an offensive threat so that OKC won't have to play 4-on-5 any longer. The big snag is that Len's stock has risen significantly over the past month or so, and there's zero chance he's falling all the way to 12. If the Thunder wants him, they're going to have to go get him.

Oladipo is only 6-foot-4, but that hardly tells the story.  His 6-foot-9 wingspan and 42-inch vertical allows him to consistently outrebound his matchup and create defensive havoc.  He has a nice mid-range jump shot and can step out and knock down the 3-ball, especially near the top of the key.  Oladipo is a super-athlete with movements that are exact and precise; no motions are wasted.  That's where he reminds many of a 20-year-old MJ.  (Keep in mind, no one knew Jordan would become His Airness when he left college.)   Oladipo is also a top-notch defender, using his quickness and length to jump in passing lanes and lock guys up in the man-to-man.

For someone as quick and athletic as Oladipo is, he's not very fluid.  He can get to the rim and hit open jumpers, but he doesn't take many difficult shots.  While that made coach Tom Crean happy at IU, he'll have to expand his offensive repertoire at the next level.  If he can add the Dwyane Wade-type lateral fluidity to his game, watch out.

Oladipo would become the heir apparent to Thabo Sefolosha at the 2-guard position.  His game is built very similarly to Sefolosha's and his offensive game has a much higher ceiling.  He would start the season as the second unit's defensive specialist and would team with Reggie Jackson and Jeremy Lamb in what would be a young and exciting backcourt.  Like Len, though, Oladipo's stock has been rising, and he isn't going to be around at No. 12.  But the Thunder has three picks it can package in a trade, so this is another potential target if they choose to move up.