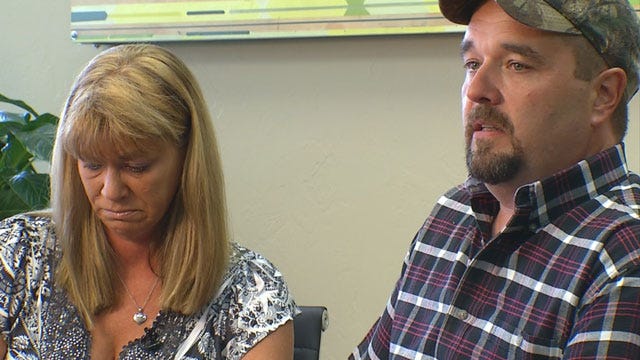 The parents of Stacey Stout made a tearful plea for answers in their daughter's death during an exclusive interview with News 9.

Officers in a multi-agency task force shot and killed Stacey Stout and her fugitive boyfriend, Christopher Stout, when he allegedly tried to make a getaway from US Marshals Task Force.

Stacey had no criminal record, but was a passenger in the truck that was riddled with bullet holes on April 9, 2013. Now, Lance and Barbre Stout have filed a federal lawsuit against nine law enforcement agencies and the officers involved in the shooting.

After four months of silence and grieving, the parents said they are taking their fight for answers public and hoping that someone will explain why their daughter was "treated like a criminal when she was not one."

7/31/2013 Related Story: Family Of Woman Gunned Down By Police Files Suit Against OKCPD, Other Agencies

"If I had a choice I'd have my daughter back," Barbre Stout said.

Instead they are haunted with thought of the night their daughter was shot near SE 44th St. and I-35.

"A lot of things flash through my head and the one that really sticks in my mind is when I was told she was shot and killed," Lance Stout said, wiping tears from his face.

The Stouts were told seven officers opened fire on the truck their daughter was riding in when her boyfriend, Christopher Stout, a career criminal allegedly tried to run from officers attempting to serve him a warrant. Both died that day.

"Neither one of them did anything to warrant what they did that night and I just don't see how they justify it."

The Stouts say their daughter did not have a criminal record when she was shot in the head.

"Someone needs to be held accountable for what they did. To date, there has been no weapon so we have been told. So why did they do it?"

That is a question both parents asked repeatedly. Barbe Stout explained she thinks the lawsuit is their only option to get answers from authorities. She says the 2-year-old granddaughter they are now raising will want to know why her parents were shot and killed.

"What we need isn't coming back. If someone could give us answers. That's the least they could do."

Many of the details as to why the officers say they opened fire have not yet been released by officials, but the criminal investigation into the multi-agency officer involved shooting has been turned over to the Oklahoma County District Attorney's Office for review.

Prosecutors will determine if the officers were justified in the shooting.