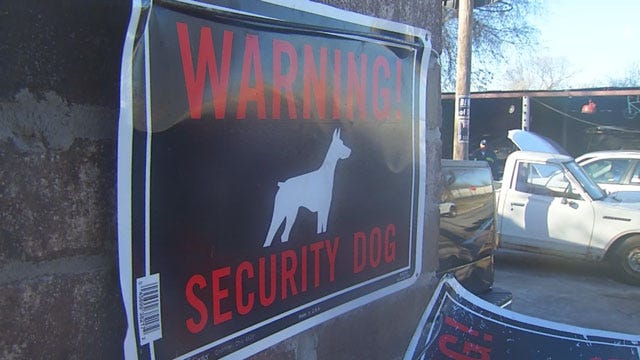 An Oklahoma County Sheriff's Deputy is recovering after she was attacked Monday morning by a pit bull outside a NW Oklahoma City car repair shop.

Sheriff John Whetsel said 21-year-Oklahoma County Sheriff's Department veteran Susan Perkins was at Portillo's Auto Shop to serve a no-contact order to an employee. Whetsel said a blue nose pit bull by the name of 'Big Head' attacked the deputy after she knocked on the front door of the business.

Whetsel said Perkins suffered deep bite wounds to both of her legs, before she pulled a handgun and shot and killed the dog.

London Portillo is the son of the shop's owner. He said the deputy should have paid attention to several 'Beware of Dog' signs that line the property. “She should have seen the signs. I know she was doing her job. She probably should have called the shop first.”

Sheriff Whetsel said deputies deal with dangerous dog issues every day. “That doesn't mean we can't go in there to do our job. That's not going to happen,” he said.

The sheriff also said ironically Deputy Perkins is an animal lover, who carries dog and cat food in the back of her patrol car. He said she uses the food to feed stray cats and dogs she encounters on the street while on the way to work, and when she drives home after her shift.