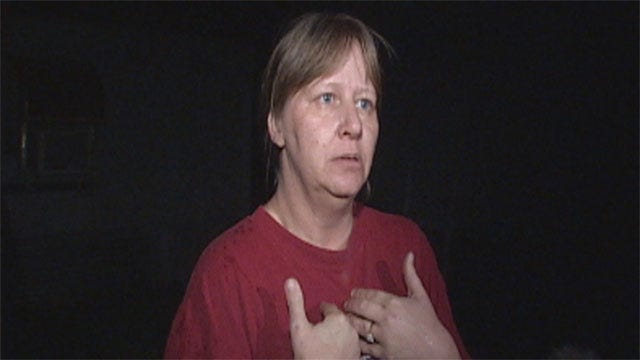 Investigators searched two vehicles they believe were used in the murder of pregnant mother of three Jaymie Adams. Police say one of those vehicles was used by Jaymie's husband, Justin Adams and mother-in-law, Tina Clarke.

News 9 spoke to Clarke, who is questioning the investigation.

The search warrants were filed for Jaymie's van and a car belonging to Clarke. Police say Justin and Clarke used the car the day Jaymie went missing. Police also say they believe those vehicles were used by the murder suspects. Clarke maintains her innocence.

Clarke says Oklahoma City police have it all wrong in the investigation into who murdered Jaymie Adams.

"I went to the police department three times telling them, ‘I know it's policy and procedure … you have to look at the spouse and family, but please follow Craigslist … follow it,'" Clarke said. "And, they didn't do it."

According to the search warrants, Justin asked his mom to borrow her car the day Jaymie went missing. Clarke tells police she drove Justin to the McDonald's where Jaymie's abandoned van was found. Investigators took swabbings, insurance verification, and medical papers from the car. They also took four soil samples from Jaymie's van.

Police have not formally named anyone a suspect in the murder, but Clarke says it is clear she and her son are suspects.

"[The police] destroyed my family more than anything I've ever seen," Clarke said.

Clarke also says she believes her son is innocent. Clarke says she has attempted to file a complaint against one of the investigators three times, but she says each time she has been "pushed out."

Jaymie Adams went missing on December 10, 2011. She was found dead near Lake Stanley Draper on January 7, 2012 with trauma to her body. Since Jaymie's disappearance and before her death, Justin Adams told police he and his wife had a history of swinging with people from Craigslist.

Justin also says his wife had been exchanging sexual favors with men from Craigslist for cash. Justin tells police Jaymie was set to meet up to three men the day she vanished. Justin has admitted to police he also solicited men on Craigslist.