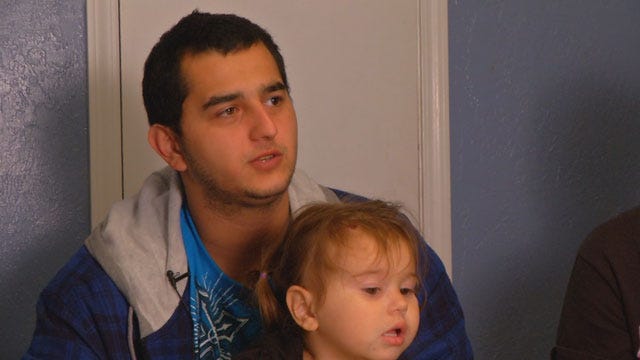 A woman dies in a car accident near Ardmore and now her husband is left to raise their two young daughters.

The 21-year-old mother died last Saturday when her SUV ran off Interstate 35 and rolled multiple times.

The family lost their home in a fire just a day before the tragic accident. Stephanie Engle was heading to Cleburne, Texas to spend a couple of weeks with her mother, while her husband stayed to continue working and find a new home for his family.

Looking at 2-year-old Angela now, it's hard to believe the toddler was thrown more than 30 feet from an SUV still strapped to her car seat. She fractured her left leg and wrist, which are now covered by orange casts. Her 1-year-old sister Penelope was taken away from the accident with no injuries.

"I didn't know if my babies were dead or alive, but I knew for sure my wife had passed and it was pretty much instant," said Travis O'Kelley.

O'Kelley says the 1995 Chevrolet Suburban flipped multiple times before it came to a stop, and then caught fire.

"I never thought she'd die. Honestly, part of me wishes it would have been me and not her. She was such a wonderful person. I'd take her spot any day of the week," said O'Kelley.

Travis and his wife had only been married for two years.

"She was just the kindest person," said O'Kelley. "I just wish I could have been there with her. I wish I had been able to drive her there."

Now, he's preparing to bury his wife while trying to stay strong for his two young daughters.

Travis and his two daughters are staying with friends and family until he can find a new home. His wife will be laid to rest Saturday morning.

Putnam City Baptist Church is taking donations on behalf of Travis O'Kelly and his two daughters, Angela and Penelope.