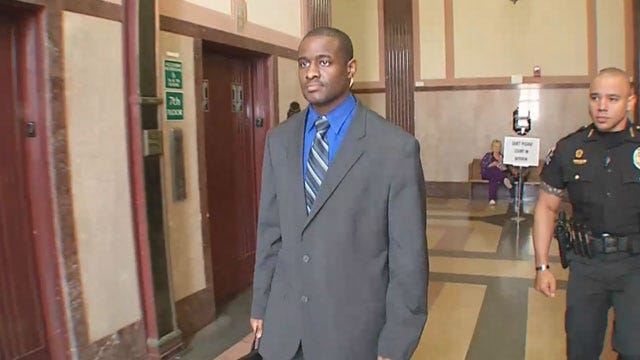 Jurors have found Fabion Brown guilty on two counts of first degree murder and one count of conspiracy, after less than an hour of deliberation, Thursday evening.

The jury was handed the case just before 6 p.m.

The state rested its case late Wednesday and brown began presenting his case to the jury, Thursday morning. He called a number of witnesses to the stand including several past girlfriends and his mother, Gladys Brown.

Brown tried to create doubt in the state's case against him by using by using witness testimony to point the finger at his alleged co- conspirator, Emily Matheson.

Brown alleged Matheson, who was his girlfriend at the time of the murder, is the person who orchestrated the murder-for- hire plot to kill his estranged wife Jessica McPherson Brown and her unborn baby in 2012.

"You know usually the saying is the person who represents themselves has a fool for a client, said Irven Box, News9 legal analyst, "he looked like he was doing a good job actually."

Box is a prominent defense attorney sat in on some of the trial and said although it's rare for a murder defendant to represent himself in a case where the state is seeking the death penalty he said it could work to his advantage, "He presents himself well. I don't know what the jury is going to think about it but I don't think they are going to be offended by him and how he is representing himself."

"It's devastating, it hurts," Brown said. "I've got to wait on an appeal and hopefully I can go home with that," he added.

News 9 asked Brown about his choice to defend himself in the death penalty case.

"It went as well as I could do," Brown said.

Jessica Brown's family had a private moment at the courthouse following the verdict, but said they did not want to speak on camera.

6/11/2014 Related Story: Murder Defendant Speaks Out About Case Before Trial

The jury recommends $5,000 fine and 10 years in prison for the conspiracy count. So far no details on what they have suggested on the two murder counts. The punishment phase of the case will take place on Friday.