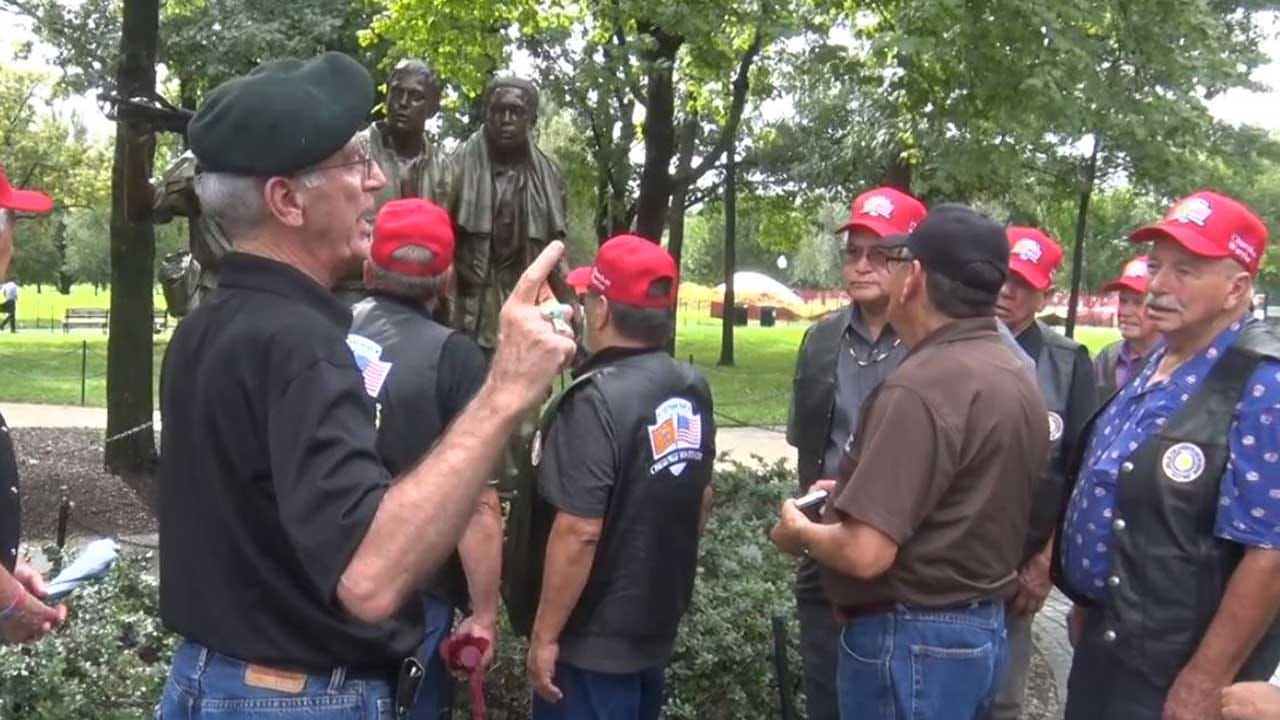 Placing a hand against the smooth, black granite for balance, 92-year-old John Cockrum stood on his toes and reached with his folded umbrella to point at a name high on the wall of the Vietnam Veterans Memorial.

“Well I just remember him when he was 17 years old and a student at Sapulpa High School,” Cockrum said.

The name belonged to a boy who attended the high school when Cockrum, a veteran of the Second World War, was its principal.

“A lot of our kids went into the service during the Vietnam mess, and I had seven of them that didn’t come back,” Cockrum said. “Well, they did come back. But they came back in those long, black boxes.”

Cockrum and eight fellow Cherokee veterans from Oklahoma headed home on Wednesday after a three-day visit to Washington DC. Each year, Cherokee Nation sends veterans to the nation’s capital on the Cherokee Warrior Flight so they can see the memorials constructed in their honor. Members of this year’s group served in World War II, the Korean War and the Vietnam War.

During this week’s trip, the veterans toured the White House and the Capitol Building, visited the war memorials on the National Mall and presented a wreath at the Tomb of the Unknown Soldier.

For many of the former servicemen, like Hose Wallis, 85, of Claremore, the trip was a chance to visit Washington for the first time.

Howard Holloway, 87, of Claremore, said the Warrior Flight program means a lot to veterans like himself.

“When I came back from Korea, we didn’t have any honor, any memorials, anything,” Holloway said. “In fact, they asked us, if we had our civilian uniforms, to wear them home, because the soldiers were not very well-respected or received when I came home. I couldn’t understand it, because I’d been over there willing to give up my life for something that I thought was important.”

At the Korean War Veterans Memorial, the veterans, who donned matching red “Cherokee Warrior” baseball caps, were stopped by tourists asking for photos with them.

“It’s been an overflowing of respect and honor since I’ve been here,” Holloway said.

S. Joe Crittenden, Deputy Principal Chief of the Cherokee Nation, said they created the Warrior Flight program in 2013, modelling it after the Honor Flight program, to recognize the many Native people that serve the country in the armed forces.

“We’re honored to do this, and we’re blessed that we can bring some up here and show them that we appreciate them so much,” Crittenden said.

“The healing process that all veterans have to go through, it starts maybe as soon as they get their DD 214, but some of them heal for years,” he said referring to the discharge papers veterans receive when they have completed their service