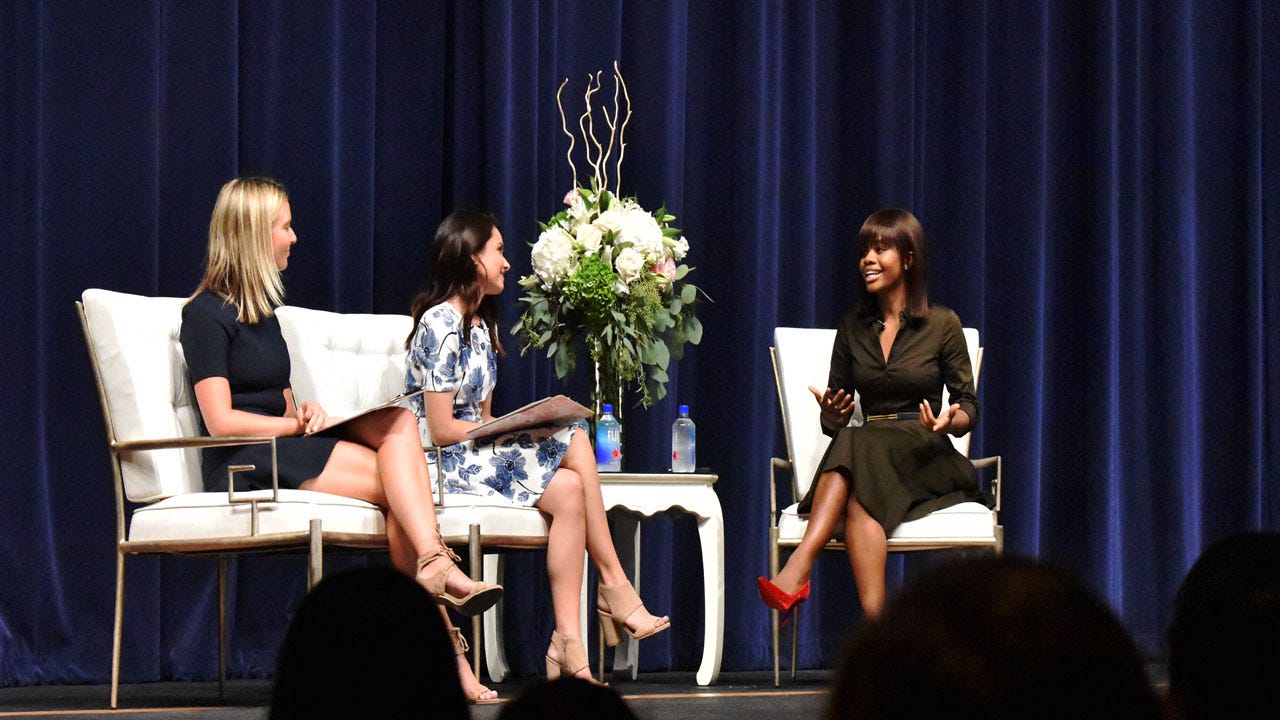 A University of Oklahoma sorority hosted three-time Olympic gold medalist Gabby Douglas for an interview and Q&A with the audience.

Douglas’s interview with Delta Gamma Alpha Iota focused on a message of hard work, perseverance, and the Olympics.

“I feel the responsibility of helping people through my story,” said Douglas in response to [UNFILTERED]’s question. “I try to help with my passion and my messages because I’ve been there and if I can help anybody, I want to. That’s why I do what I do.”

The Alpha Iota chapter Lectureship in Values and Ethics series showcases speakers that have “demonstrated a consistent commitment to values and ethics in her daily life.” Douglas is Alpha Iota's sixteenth Lectureship speaker, according to their website.

The some members of the OU men and women Gymnastics teams came to hear Douglas.

“[Gymnastics] has been a part of our lives for so long,” OU Women’s Gymnastics Senior Alex Marks said. “It means everything.”

“You grow a great relationship with your teammates and learn to be very independent,” said Sophomore Gymnastics team member Maggie Nichols.

Douglas spoke about how her mother, Natalie Hawkins, taught her perseverance.

“When I was injured, she told me to work on my mental state and focus on how to better your career,” Douglas said.

Hawkins told an anecdote about how she pushed her daughter to succeed without pushing her too hard.

“And I would say, ‘You hate bars? Well, that’s always going to be your worst event if you continue to say you hate bars,” said Douglas’s mother. Hawkins said the bars became Douglas’s best event.

Douglas was the first woman of color to become the Individual All-Around Champion, according to her website.

“It’s a responsibility to hold that achievement,” said Douglas. “Sometimes it still feels like a dream.”

“She is so accomplished and so inspiring and to see that in person, to see her in person, is honestly something else,” Pham said.

The members said they wanted to bring in such a big speaker to kick off the sorority's 100-year anniversary celebration.

“It was really sweet that she took time out of her busy schedule to come see us. I think it’s cool too because a lot of collegians and people here grew up watching her go to the Olympics,” Ward said.

Ward said the lectureship series is a great example of how DG’ serves the community.

Pham said the sorority allowed her to encourage others.

“It’s all about, in my opinion, empowered women empowering other women,” Pham said. “With a sorority you really get that opportunity and the chance to not only do that but also to experience that same thing.”

Lailah Danzy, an 8 year old gymnast who is African-American, came from Tulsa to see Douglas. When asked how Lailah felt when she saw Douglas, she said that she felt “joyful, happy” with her little sister, Trinity nodding in agreement.

Lailah said she wants “to go to the Olympics” for gymnastics when she grows up.

Lailah’s mother, Tamara Danzy, said her daughter already practices 25 hours per week and is trying out for a national competition in two weeks.

Douglas answered questions from the audience after the formal interview.

The audience asked her questions ranging from “what is your favorite stuffed animal?” to “how do you stay so humble?” When asked how Douglas remains humble, she immediately pointed at her mother who was sitting in the audience.

“I love it, I never get too air-headed and my head never gets too big to fit out the door” said Douglas.

Douglas described “Olympic spirit” as “healthy competition” and went on to talk about how many athletes are just happy to be at the games.

Douglas said the true “beauty of the Olympics is coming together.”

An audience member then asked Douglas to take away the gymnastics and and asked who she would be without it.

The gold medalist responded by saying that she is “still learning” about herself and her purpose is in the world.

“Tell fear no! Be bold and courageous,” Douglas addressed the audience.

When asked how Douglas handles pressure she said that “pressure makes diamonds.”