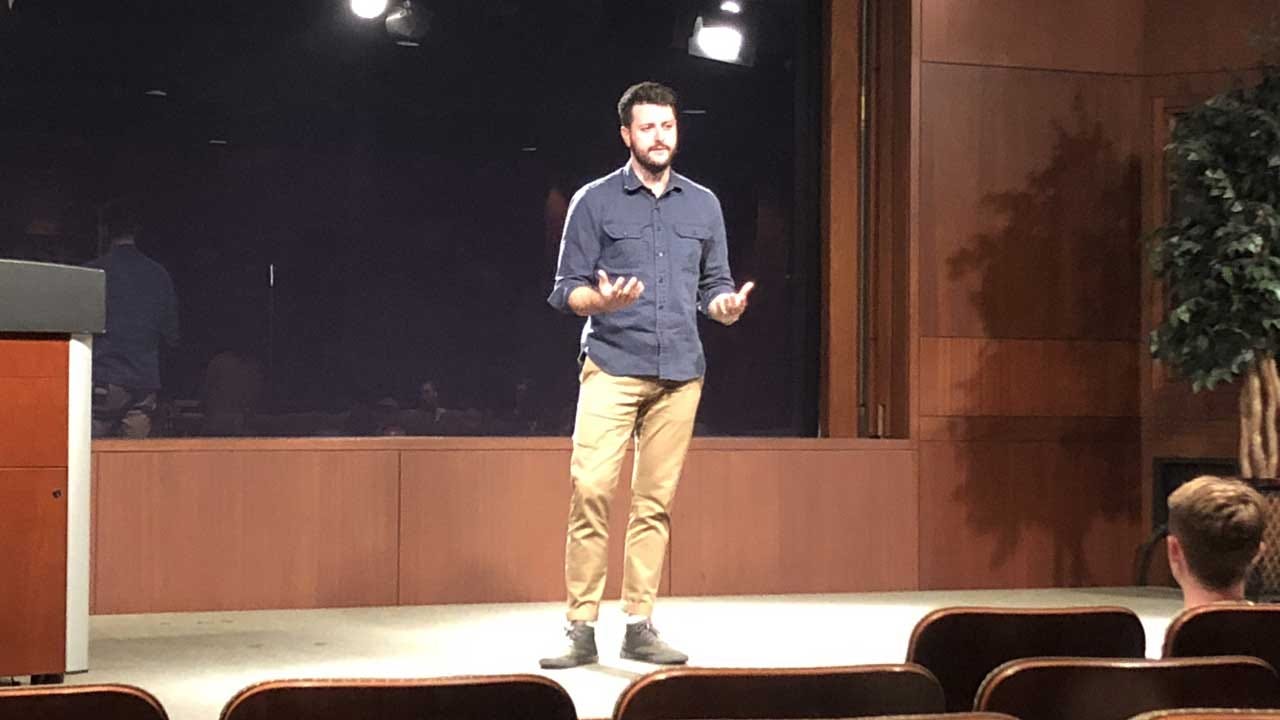 An Oklahoma star is born. Successful Hollywood screenwriter and Oklahoma native Kevin Costello managed to fit time in his busy schedule to make a trip back to his alma mater. Costello graduated from the University of Oklahoma in 2007 with a journalism degree. Now, he resides in the sunny state of California, where he has turned his dreams into a reality.

In 2017, his name flashed across big screen when his movie, Brigsby Bear, was released.

Costello moved to Los Angeles after finishing his undergraduate degree at OU. With the money he had saved from working in Norman the summer after graduation, Costello packed up his Oklahoma life and headed out to California to pursue his dreams of screenwriting.  Despite no connections, the Hollywood hopeful began applying for internships with the hopes of that something would work out.

Costello said he was able to find work within a company that no longer exists, but the experience was enough to get his foot in the door. After four and a half years of assistant producing, he was able to transition to professional writing.

Costello’s movie, Brigsby Bear, follows the story of a young man named James Pope as he attempts to adjust to a normal life after years of unknown captivity. James sets out to create a finale to his beloved childhood TV series, Brigsby Bear Adventures.

James Pope takes the audience on a heartfelt journey as he turns his dream of sharing Brigsby Bear’s Adventures with the world into a reality.

“I think the biggest struggle in making this movie was convincing people to let us make it.” said Costello.

Being first time filmmakers, Costello said it was hard to convince people they were worth the money.

“The marketing was hard.  It’s such a strange movie; it doesn’t really fit into any categories.” said Costello.

In Costello’s opinion, Brigsby Bear is, “really about the power of art and creativity that unite us in ways that are unexpected...and really just about art in story-telling lets us deal with our own lives in a way that can make sense of the chaos and reorder trauma. Storytelling is a way that we process reality because reality is chaos and story-telling is something that we tell ourselves to make it seem more controlled.”

Costello said his initial hopes were simply that someone would let him make this movie, but in the end, his expectations were far exceed.

When asked what his favorite moment of the moving making process was, Costello responded, “Getting to hangout with my friends. It felt like summer camp in a way. We were all staying at the same hotel hanging out on the weekends.”

Although Costello doesn’t know exactly what the future holds for him, he said he is sure that he wants to continue to work with Dave McCary, the director of Brigsby Bear, and Kyle Mooney, co-screenwriter for Brigsby Bear who also starred in the movies leading role of James Pope.

To Costello, success is not measured by a specific end goal, but rather by the milestones.

“I feel like I have a lot to give.  If I am still doing this in ten years that would be a huge accomplishment.” said Costello.

Although Costello thinks the continuation of what he is doing now would be an accomplishment, OU’s College of Journalism thinks that he is already quite accomplished.

Costello will be one of three receiving the Gaylord College of Journalism’s 2018 Young Alumni award. Costello said receiving this award is a huge honor and completely surreal.  He said it is something he never dreamed he would be a candidate for let alone a recipient.

“To end up in a place where I am being invited back to be honored with this is quite crazy to me.” said Costello.

Costello said he misses Oklahoma and can see returning home in the future.