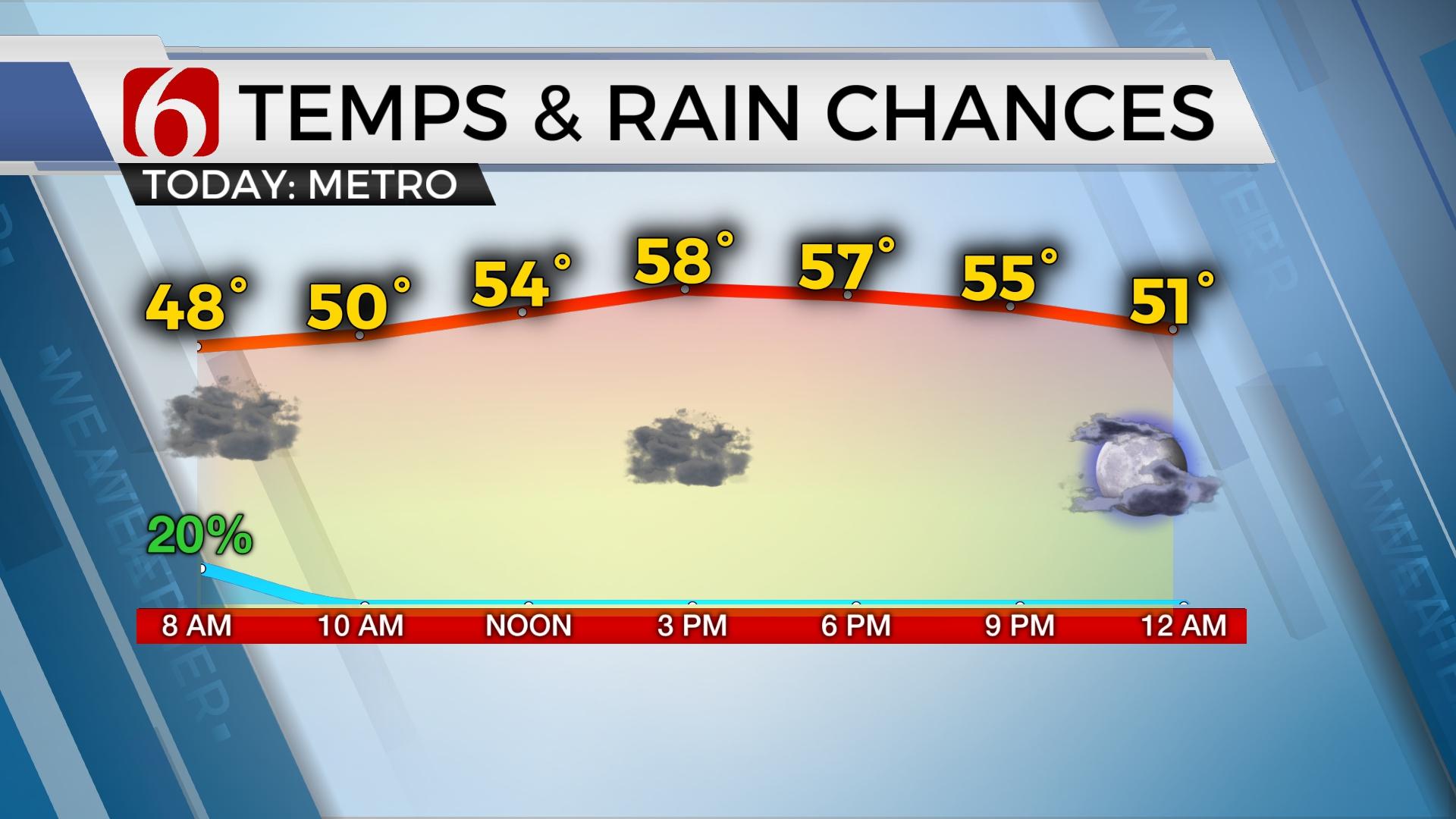 If you’re into podcasts or in a rush, check out my daily weather update. Search for NewsOn6 and ‘Weather Out The Door’ on most podcast providers, including Spotify, Stitcher and Tune-In, or Click Here to listen on Apple Podcasts.

TULSA, Okla. - A rainy morning is underway across Green Country. The rainfall is moving eastward early Thursday morning and will exit most of the area between 4 a.m. and 8 a.m. Clouds will keep temps in the lower upper 40s and lower 50s Thursday morning near Tulsa with slightly higher readings southeast. Later thursday afternoon, partial clearing from the west to east brings highs nearing 60 along the I-35 corridor and upper 50s across far eastern sections. Southeastern Oklahoma will experience highs in the lower 60s. The front moves southeast again later Thursday night with a few scattered showers developing across extreme southeastern Oklahoma. Friday morning lows will range from the 30s to 40s. Afternoon highs on Friday will stay in the lower to mid-50s with north winds and partly to mostly cloudy sky. Another fast wave moves across the area later Friday night and exits early Saturday morning. This brings additional showers with some thunder quickly into and out of the area. The arrival of this system is slightly faster in the data this morning and may impact Friday evening around the 7 p.m. to 10 p.m. period. If the exiting timing doesn’t change, this will have little impact on Saturday activities with most of the rain exiting before 9 a.m. Sunday should be fine with southeast winds returning with highs nearing the upper 50s and lower 60s. A powerful storm system will influence the central and middle part of the nation early next week with the potential for strong to severe storms Monday and part of Tuesday for Eastern Oklahoma. Colder weather returns through the middle and end of next week. The pattern supports a powerful upper-level trough developing this weekend across the western U.S. and moving across the Rockies into the central plains by Monday. Most model data support a strong southerly flow from the Gulf that would transport deep moisture across the state. Pressure falls along the Rockies will bring south winds from 20 to 30 mph with mostly cloudy conditions Monday with highs in the mid-60s. The timing of the system has not been consistent regarding the exact parameters but continues to offer consistent messaging of the strong to severe potential. As the system moves east either Monday night or early Tuesday morning, storms will move out of the state with chilly to colder weather arriving for the middle to end of next week. The overall pattern may keep us colder for the next two weeks. The pattern should also remain progressive. Thanks for reading the Thursday morning weather update.