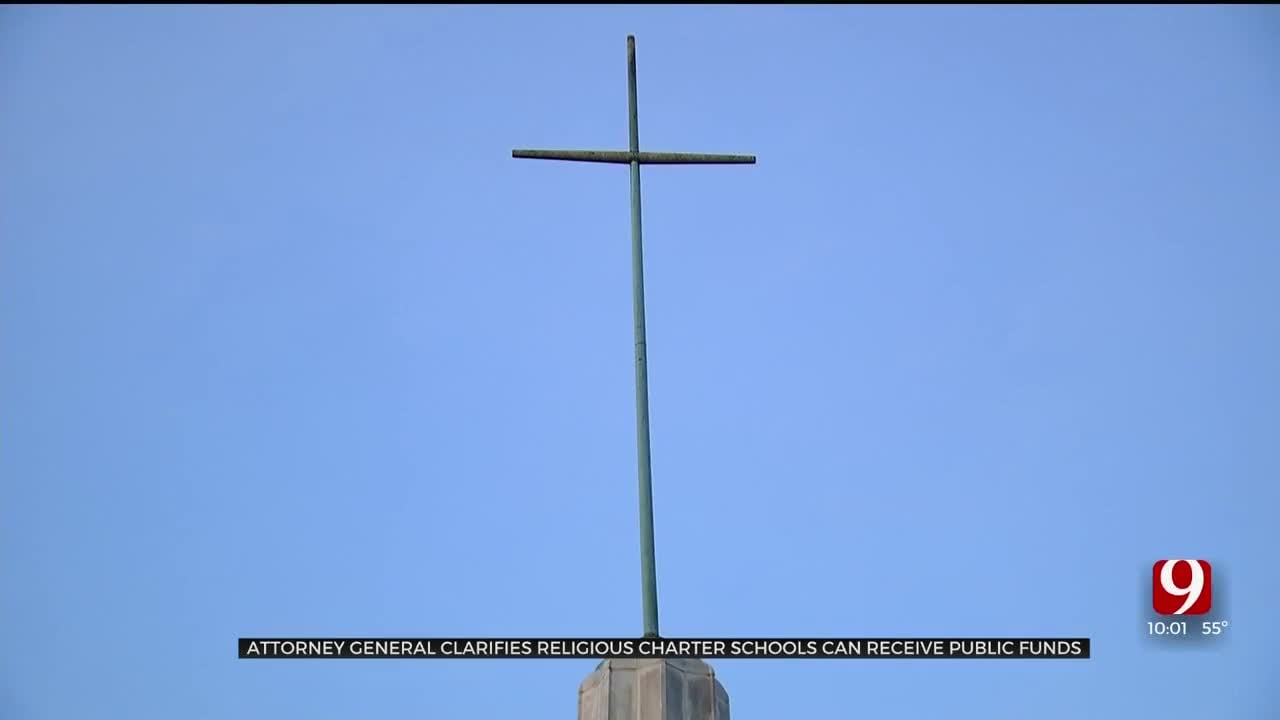 Oklahoma is on track to have the first publicly funded charter school in the nation that's operated by a church.

A year after the Oklahoma City Archdiocese asked the Oklahoma State Virtual Charter School Board to open one, they're one step closer to making it happen after Attorney General John O'Connor's official legal opinion came out.

In it, the Attorney General states: "Non-sectarian and non-religious requirements found in 70 O.S.2021, § 3-136(A)(2) of the Oklahoma Charter Schools Act likely violate the First Amendment to the U.S. Constitution and therefore should not be enforced."

It means if the ArchDiocese gets the board’s blessing, taxpayer dollars will fund a catholic education.

Not all parents in the John Rex Charter School pick up line are excited to pick up the tab of religious education.

"I'm a firm believer that church and education and government should be separate entities," Diane Lucero, a parent, said. Another parent in the pick-up line, Sherry Grant, was more on the fence when she said, "I'm kind of mixed. I can't say yay or nay really."

O'Connor gave his official legal opinion on Thursday and it sided with the Archdiocese of Oklahoma City. The church sent a letter and asked the State Virtual Charter School Board in the fall of 2021 if it could open a virtual charter school.

Some Oklahoma charter schools are even for-profit, Farley said.

The Diocese also said, "Charter schools in Oklahoma are private entities operated by private-including even for profit-organizations." in the letter to the

Virtual Charter School Board. The church based their argument in that letter on three US Supreme Court decisions. Those are:

In all three cases, the Supreme Court deemed withholding public money based on religion violates the Free Exercise Clause (religious freedom) of the First Amendment. The Virtual Charter School Board still has to approve the decision before the Diocese can make a move, and public dollars can fund a virtual catholic charter school.

"That pool of money is for all Oklahoma kids. It's not just for public school kids," Farley said.

Diana added, "I think there's going to be a huge gap in education and inequality in the state when it comes to having those funds allocated." She added, "a lot of the schools that are in much need now will be disregarded and not be taken care of."

What's offered at the Catholic charter school will be based on what a school needs.

Farley said it's illegal to collect tuition from people through a state funded charter school, but it's not clear if the students who pay tuition in those brick-and-mortar schools will have access to courses like the German class in his example. Farley also said that public schools' low education outcomes are more reason to open their doors to students.

Charles Thuo, who also waited to pick up his John Rex student said he is also picking up what the Diocese is putting down.

"At the end of the day it's the job. So long as they're doing the job that they're supposed to do, it's kind of teaching the kids, that's all that matters," Charles said.

If their plan gets approved, Farley said they aim to open their doors in fall 2024.