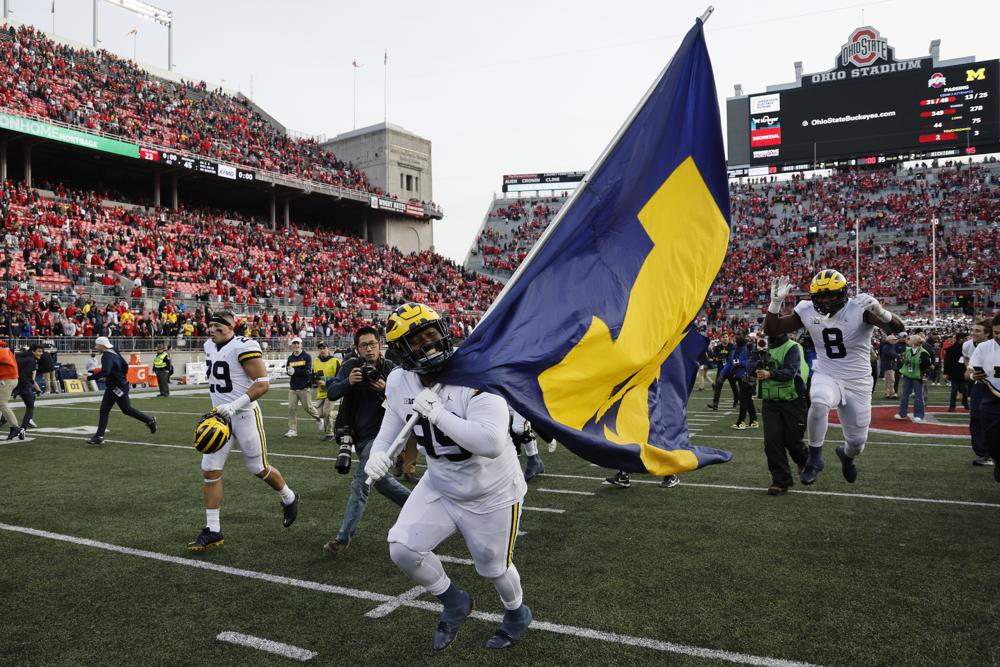 After Michigan beat Ohio State with stunning ease for the second straight year, Wolverines defensive lineman Cam Goode grabbed a huge maize and blue flag and rushed with teammates to the block “O” in the middle of the Ohio Stadium turf.

They planted that flag and mugged for a bank of cameras.

Again, Michigan was the best team in The Game, this time by a score of 45-23.

Behind career-performance by J.J. McCarthy and Donovan Edwards, the Wolverines (12-0, 9-0, No. 3 CFP) advance to the Big Ten championship next Saturday, with hopes for a second straight playoff appearance firmly in their control.

As for the Buckeyes (11-1, 8-1, No. 2 CFP), they’ll have to hope they can back into the College Football Playoff after again crumbling in their most important game.

Jim Harbaugh and Michigan snapped an eight-game losing streak against their fiercest rivals last year with a cathartic 42-27 victory in the Big House. Now they have a two-game winning streak in The Game for the first time in 22 years.

“Could not be more proud,” Harbaugh said. “Knew the team was focused and determined as they have been all season. This is a locker room of heroes.”

Playing almost the whole game without injured star running back Blake Corum (knee), Michigan was still able to beat Ohio State in Columbus for the first time since 2000.

McCarthy, the second-year quarterback who won the starting job from incumbent Cade McNamara early in the season, came up huge when Michigan needed it most. McCarthy passed for 263 yards and didn’t commit a turnover.

McCarthy’s previous longest pass completion this season was 42 yards, but against the Buckeyes he threw three touchdown passes of at least 45 yards, the most scoring passes of 45 or more in the history of the 105-game series.

He connected on scoring passes of 69 and 75 yards to Cornelius Johnson in the first half, then hooked up with Colston Loveland in the second half for 45 yards and the freshman tight end’s first career touchdown reception.

“I thought he did a good job of making some throws under pressure,” said Ohio State defensive coordinator Jim Knowles, who was hired to fix the Buckeyes’ defensive failings in last year’s game. “Now we knew he could throw the ball. I just thought he played well when he had to.”

On third-and-10 on the Ohio State 13 early in the fourth quarter, McCarthy was on the run from Zach Harrison when he lofted a pass to the end zone toward Ronnie Bell, who drew a pass interference call on safety Ronnie Hickman.

That put the ball on the Ohio State 2, and three plays later the 19-year-old quarterback from suburban Chicago bowled over a tackler for another touchdown and a 31-20 Michigan lead.

The Buckeyes settled for a Noah Ruggles field goal to get the score to 31-23.

Then Edwards put the game away for Michigan.

Corum’s backup, who was playing with a heavily wrapped and an injured hand, raced through a hole in the right side and went 75 yards for a touchdown with 7:11 left.

After Ohio State quarterback C.J. Stroud was intercepted, Edwards was off again, pulling away for an 85-yard scoring run.

“This is not the outcome we all envisioned,” Ohio State coach Ryan Day said. “I thought we had good preparation. I thought we were building toward playing really well.”

Michigan: McCarthy was the man. Edwards came up big late. And the Wolverines’ defense made the stops they needed in the second half. The late runs by Edwards sucked the oxygen out of the Horseshoe.

Ohio State: Heisman hopeful Stroud was 31 for 48 for 349 yards and two interceptions, but Ohio State never got a running game going and settled for field goals in the red zone. The Buckeyes had opportunities but didn’t take advantage.

Former Ohio State offensive lineman Harry Miller was enthusiastically welcomed back when he ran out to be introduced as part of the Senior Day activities.

Miller revealed in a detailed Twitter post in March that he was retiring from football because of mental health issues that included suicidal thoughts. He explained the situation further during an appearance on NBC “Today” show.

The long-haired Miller got a great cheer from the crowd when he ran out wearing shorts and his No. 76 Ohio State jersey to hug Day and his mother Kris.

Ohio State: The Buckeyes have to hope the CFP selection committee gives them a chance to play for a national title or it will be second consecutive disappointing trip to the Rose Bowl.