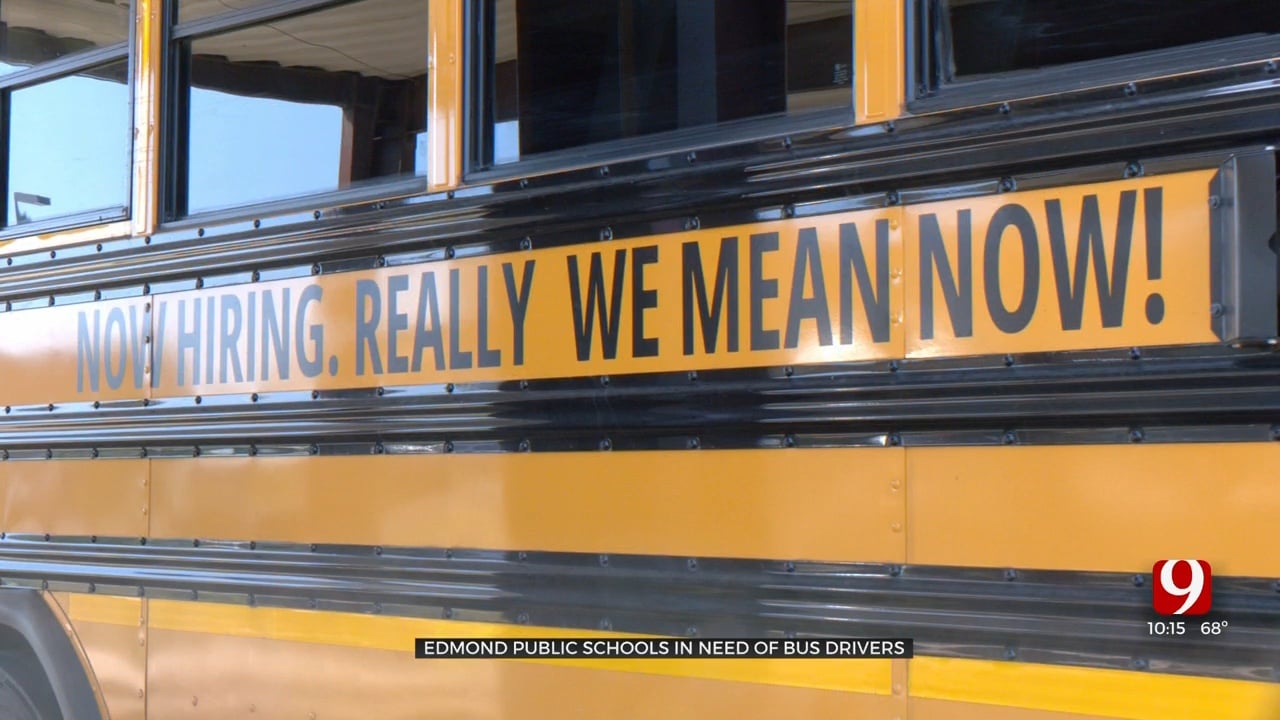 A metro school district is in desperate need of bus drivers and they’re even willing to pay for training.

Edmond Public Schools said they are down 16 drivers; the short staffing has administrators picking up routes. The district is now counting on a campaign to bring in more workers.

“We transport over 10,000 students a day and we have a really high rider ship,” said Susan Parks-Schlepp, the Edmond Public Schools Director of Communications.

Late drop-offs and pick-ups, a thing that has become all too common for Edmond Public Schools.

“It really breaks our heart when we have to send out messages that say ‘your route today will be extremely late, but we do apologize, and we will send a driver to your school. If you can transport, please do so,’” said Deborah Fish, a longtime Bus Driver for the district.

In response to the shortage, EPS launched a new campaign aiming to draw attention to the fun parts of the job.

“We put slogans on the buses to let the public know ‘hey, my office has windows and wheels’ ‘smiles come standard in this job’ ‘I get summers off and have full benefits’. Just those extra little pieces of information to get the people to understand that this might be a fit for them,” said Parks-Schlepp.

Veteran Driver Debrah Fish has been on the job for more than 20 years. Starting her days around 6 a.m. before heading out on her morning route.

“We have a lot of mid-day activities, a lot of field trips so much going on that I don’t think anyone knows about. It is so much more than just picking up kids and taking them to their school,” said Fish.

Now a CDL trainer, she said it’s the kids that keep her coming back.

“We are that first face and that last face. If we can smile and say, ‘hey man awesome kicks!’ ‘I like your shirt’ ‘did your team win’ you know? Just that little bit let them know we see them,” said the Bus Driver.

Edmond is the second largest district in the state in terms of ridership after Tulsa Public Schools.

“Edmond public schools has grown by over 700 students just this year. If you think about that, that is the size of a good size elementary or middle school. As we continue to grow in student population, we are going to keep having this problem. We are second in bus ridership only to Tulsa public schools,” said Parks-Schlepp.

They hope the new campaign along with the benefits will draw in more drivers.

“Driving a bus, if you have your CDL, is a little over $16 an hour. Now, there are a lot of jobs on the marketplace that pay that amount of money. Very few of those jobs offer training, and full medical benefits,” said the Director of Communications for the District.

The district says the training takes about 3 weeks.