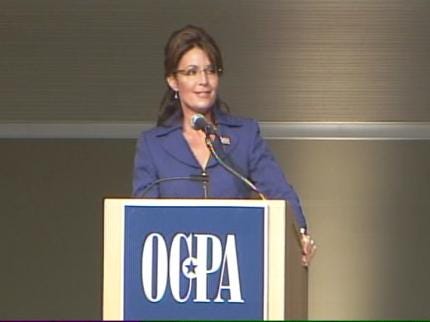 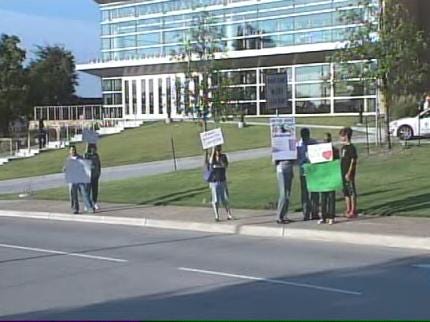 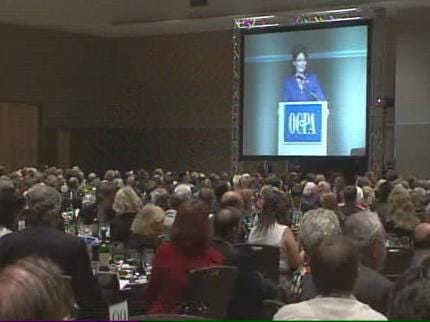 Palin was the featured speaker at the annual Liberty Gala held by the Oklahoma Council of Public Affairs.  The council says they brought her to Tulsa because her message of free market, entrepreneurship and individual liberty is one that resonates with all Oklahomans.

"Sarah Palin is someone that conserve look to for leadership and we're thrilled to have her," said Josh Harlow, Oklahoma Council of Public Affairs.

"She is kind of a superstar," Stan Zaloudek, Oklahoma Council of Public Affairs, said. "If she supports the issues, we support then that's a good deal."

Palin's trip comes less than 24 hours after her political clout was on display Tuesday night, when Christine O'Donnell won the Republican Primary in Delaware after being backed by Palin.

During her speech, Palin talked about the need for a more limited government that practices fiscal restraint and the importance of a free market in revitalizing the economy. She touted what she says is the similarities between Alaska and Oklahoma.  She also voiced her support for Mary Fallin, Republican candidate for Oklahoma governor.

Not all Oklahomans were excited about Palin's visit to Tulsa. Several people protested outside the Convention Center, saying its Palin and her supporters who are out of touch.

Chris Wright, The News On 6: So you wouldn't say inside tonight, that wouldn't represent America to you?

Love her or hate her, experts say Palin's influence on the upcoming midterm elections is undeniable and Palin did her best to rile up the conservative base.

"And it is time to put aside the internal struggles and power grabs and all those things that go on in a political machine," she said.  "We need to fight united now for what is right and beneficial for all Americans as we head into these midterms."

This was Sarah Palin's second trip to Tulsa and third stop in Oklahoma.  In March, she was in Tulsa as part of Glenn Beck's "Taking Back Our Country Tour."  Palin was also in Norman last December as part of a national book signing tour.