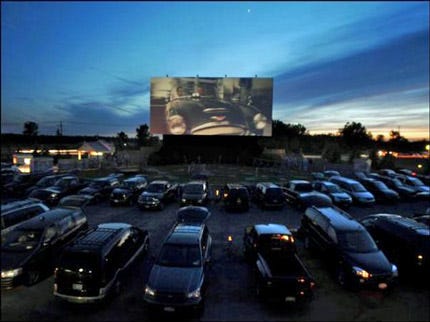 LOCKPORT, New York -- Tulsa's Admiral Twin Drive-in Theater will be getting some long-distance help this weekend, from another drive-in theatre in western New York state.

The Transit Drive-In in Lockport, New York is holding a fundraiser for the Admiral Twin.  The Admiral Twin's wooden screen tower burned down on September 3rd, 2010.

It will show the movies "The Outsiders" and "Dirty Dancing" and donate the proceeds to the effort to rebuild the Admiral Twin's screens.

"I don't like hearing about any drive-in going under anywhere, for any reason," said Transit owner Rick Cohen.

Cohen has managed the Transit, which is located a few miles northeast of Buffalo, since 1987 and is the third generation of the Cohen family to own the theater.  With four screens, a 19-hole mini-golf course and even free wi-fi, it is the largest drive-in theater in New York and has just wrapped up its 58th summer of showing movies.  That makes it one year younger than the Admiral Twin.

Cohen says the Admiral Twin is a treasure that must be rebuilt.  "There are not enough drive-ins left in the world that I can sit back and watch one die without doing something to help out."  He says the theater's location on Route 66 is another reason to save it.

The Transit will show "The Outsiders" specifically because it takes place in Tulsa and some of its scenes were shot at the Admiral Twin.

Cohen reacted emotionally when he heard about the fire at the Admiral Twin.  "My thoughts went back to the many nights I'd spent watching movies and working at the drive-in, and how tragic a loss it would be for that community to lose its last remaining drive-in."

He said he's been to Oklahoma City to visit the Oklahoma City National Memorial, but has never been to Tulsa.  He hopes to be here when the Admiral Twin re-opens so he can enjoy the celebration.