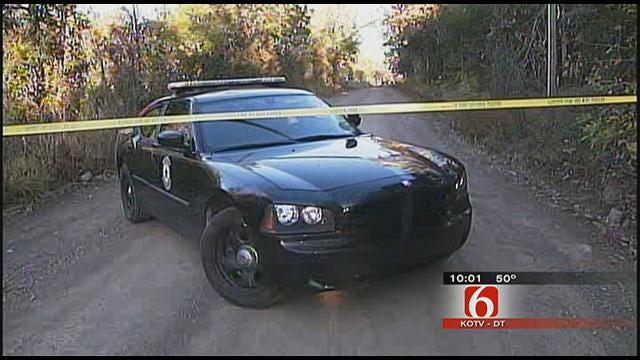 "I've been doing this for 26 years and you don't get used to it," said District Attorney Jeff Smith.

Smith says the secret put James Haskins and his wife, Lucinda, behind bars.

Legal documents show their 16-year-old daughter told the DA's office in August of 2010 she gave birth to a little girl. The father was a boy she met at camp.

That teenager told authorities the baby did not cry and her father, James, said the infant was dead.

The teenager also told investigators her father buried the baby in the woods behind the goat pen.

The family's home is in a very secluded area and actually backs up to the Arkansas state line.

Now, investigators from the district attorney's office are searching the woods near the house for any signs of a burial ground.

"We have a forensic anthropologist from the medical examiner's office in Tulsa who's down here aiding in the collecting of evidence," Smith said.

Smith says his office initially investigated the Haskins' home because of accusations of physical and educational neglect.

The Haskins have nine children, ranging in age from three to 17. One of them says her father sexually abused her and a younger sibling.

"The children might have sporadically attended school. There were some allegations of them being home schooled, too. There was the great possibility that there was not a lot of interaction with other mainstream people—teachers, counselors, other friends—that type of thing," Smith said.

All nine children are now in the state's custody.

Neighbors say the family kept to themselves and are horrified over what investigators say may have happened down the road.