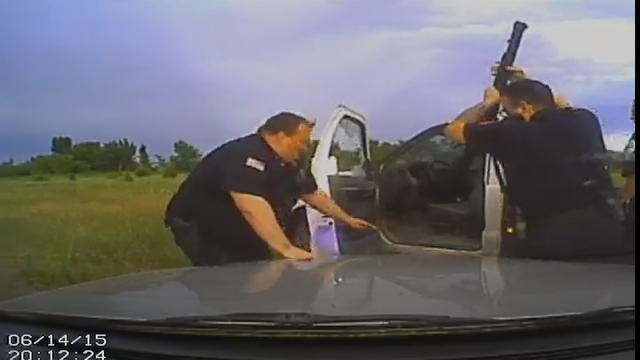 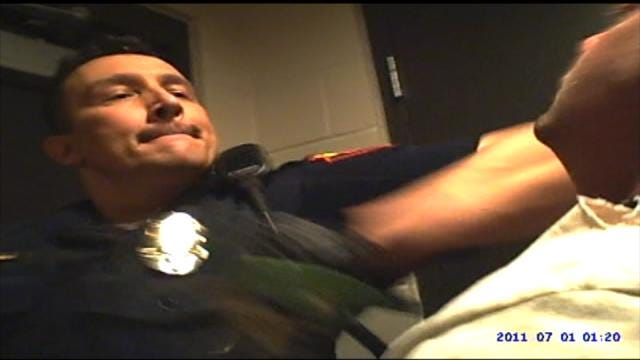 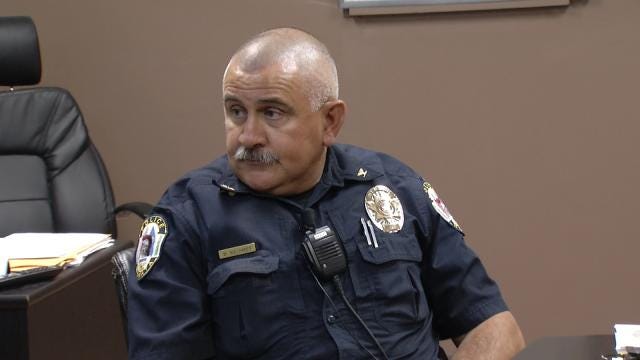 New video just released shows another view of an arrest that led to a complaint about excessive force.

It shows Owasso officer Mike Denton hitting a suspect with a shotgun, even after the suspect was stunned by a Taser.

The officer is on paid suspension and investigators have plenty of video to see what happened.

The chase stretched from Tulsa to Nowata with a police helicopter overhead and several camera-equipped cars in pursuit; even a civilian captured part of the scene.

But it was a dash-cam on a Nowata police car built into the rear view mirror that got the best view.

Nowata Police chief Mike McElhaney went over the video with News On 6 and said it shows his officers doing the right thing.

What are under investigation are the actions of Owasso Officer Mike Denton, the officer with a shotgun.

The video shows Denton sticking the shotgun in and punching it on the suspect who had just been Tased.

Another officer appears to stop Denton from continuing, but when the suspect - who had a knife - was pulled out and on the ground, Denton hit him again with the gun at least six times.

Denton's actions prompted the new investigation just months after he's back on the force after another excessive force complaint.

The old video shows Denton elbowing a handcuffed suspect in 2011.

Denton lost his job but won it back, with back pay, through arbitration and the courts.

The city paid the suspect $75,000 to settle the complaint.

The new investigation against Denton is just beginning and whether or not it was excessive force, it happened while other officers chose other tactics.

"They Tased him from the passenger side to get him to drop the knife; he did drop that knife and that's when he comes up with the shotgun. They were trying to get him out of the vehicle, they ended up getting the door unlocked and getting him out the driver's side," McElhaney said.

We contacted Denton's lawyer for comment and he hasn't responded, but earlier in the week he denied the officer had done anything wrong.