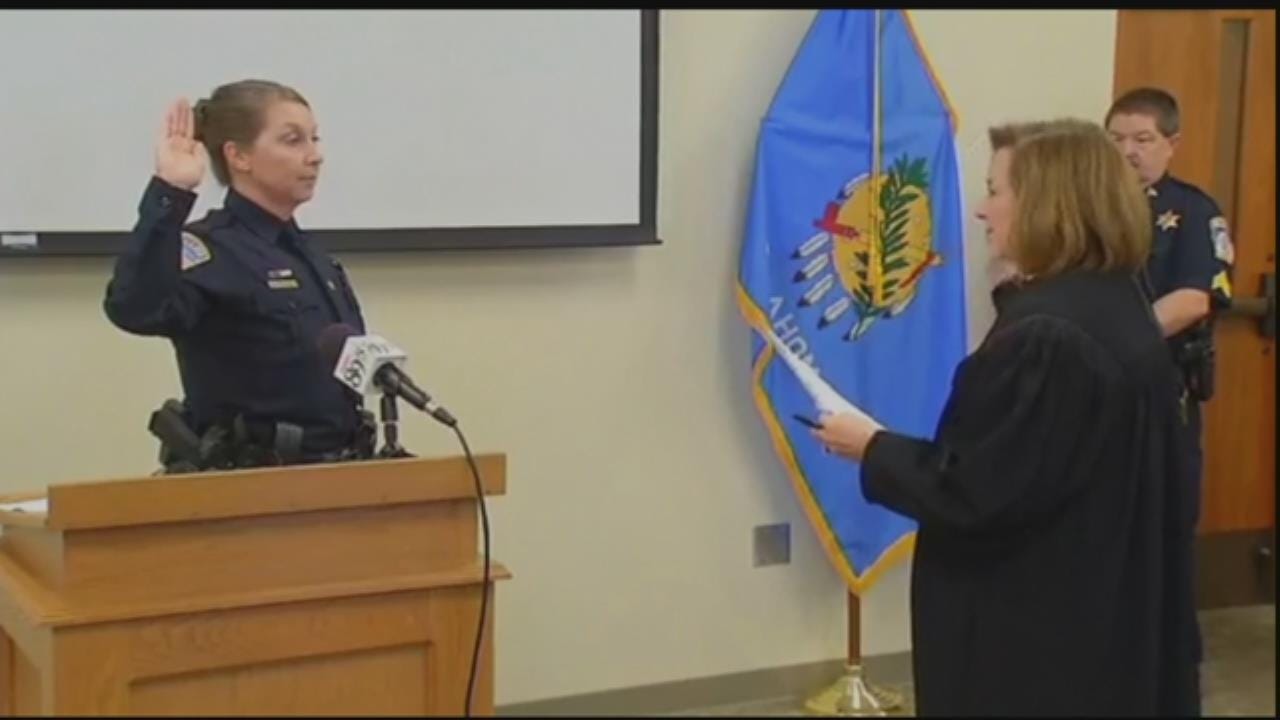 Former Tulsa Police Officer Betty Shelby is back in uniform less than a month after retiring from Tulsa Police Department.

Shelby was sworn in Thursday, August 10, 2017, as a reserve deputy with the Rogers County Sheriff's Office.

Sheriff Scott Walton said bringing Shelby on board as a volunteer deputy was a no-brainer, but he said they're treating her no differently than any other person they hire.

"Today, we welcome as a Rogers County Deputy, Betty Shelby to the Rogers County Sheriff's Office," Walton said at a news conference.

Walton said Shelby went through the interview process and completed a background check.

"I am honored to have been chosen to be part of this wonderful department," Shelby said.

Shelby announced her resignation from the Tulsa Police Department on July 14, less than two months after going back to work following her acquittal of manslaughter in the shooting death of Terence Crutcher. In her resignation letter, Shelby said sitting behind a desk, isolated from other officers and Tulsans, isn't for her.

"I would like to thank Sheriff Walton for giving me this opportunity to continue being active in the profession I've dedicated my life to," Shelby said.

"As a reserve deputy for the Rogers County Sheriff's Office, I will continue to serve the great state of Oklahoma and strive to improve the relationships between law enforcement agencies and our community through education and community involvement."

News On 6 learned Wednesday that Shelby would be taking her oath with RCSO.

8/9/2017 Related Story: Ex-Tulsa Cop Betty Shelby To Be Sworn In As Reserve Deputy

Shelby is the 31st member of the reserve program, said RCSO Maj. Coy Jenkins. She will start as a reserve deputy immediately, Walton said.

"The only demand that she had of us that she would be vetted out like any other person that was hired," the sheriff said. ""This girl has been tried and tested more than any of us in this room."

He said he has no reservations about bringing Shelby onto the force, and that she'll have an opportunity to go full-time in the future.

"We the People Oklahoma" released a statement saying in part that it is their "opinion that Betty Shelby is unfit to be a police officer, which was also the recommendation of the jury that acquitted her on manslaughter charges."

Tulsa Police Chief Chuck Jordan says he "respectfully will not have a response" to Shelby's new position. I reached out to the Terence Crutcher family's attorney, but did not hear back.