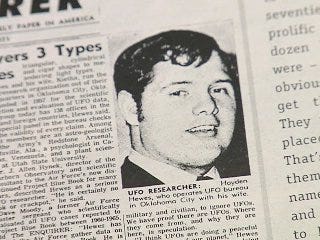 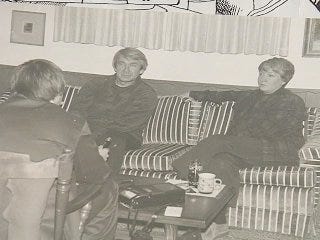 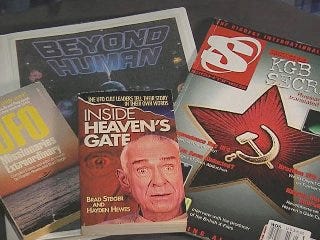 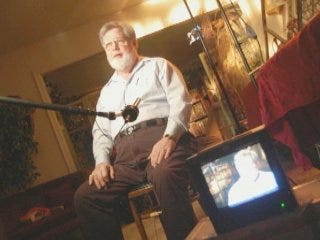 OKLHOMA CITY -- In 1973, investigative reporter Hayden Hewes sat down to interview two individuals who would later shock the world with their story and suicide.

Marshall Applewhite and Bonnie Neddels had heard Hewes's local radio show about UFO's and the paranormal.

"This couple comes to me saying that they wanted me to announce to the world that they were here and that they could show death overcome," Hewes said. "The mysterious two, Bo and Peep, he and she. They wanted no publicity on themselves, just their mission, that death could be overcome. Whether you believed in them or not, it didn't matter. It wasn't the soul that wasn't going; their physical bodies would rise in full view of anyone when the aliens came."

After the interview with the mysterious two, Hewes said that he felt that he had seen the man before, but didn't know from where.

"One day I was working on a story for the New York Times. I happened to have an illustration published in a book years ago called ‘The Aliens' as to what an alien looked like reported around UFO's," Hewes said. "I happened to have a picture of these people on my desk at the same time I had a copy of my book. It was an identical overlay in his physical structure, what he was wearing, his hair, his jaw, and his eyes. That was why I felt like I knew him, because it was based on my own research."

Hewes and his co-author Brad Steiger wrote a book based on their interview with the mysterious two. After the notoriety of the book died down, not much else was thought of about Bo and Peep until 1997.

In 1998, the Heaven's Gate story was voted one of the best stories of the decade. Again Hewes was sought out for his input since he knew their story from the beginning.

"I was contacted last year by Tower Productions out of Chicago to come down and film a segment for "The Final Report", which was the Heaven's Gate story of '97," Hewes said.

For the always curious Hewes, doing the interview wasn't to see himself on the National Geographic Channel; it was to see other people's conclusions after doing their own research on the subject.

"I'm just anxious to see their slant on it after their investigation into the different personalities, the people, the pros, the cons, to see what their conclusion is," Hewes said. "My part in it, to me, is not the highlight, I know my story. What to me, and what I'm looking forward to seeing, is the conclusion they reached from their perspective on the story. Whether it agrees with me or disagrees, I can always respect a skeptic for their narrow minded opinion."

"The Final Report" on Heaven's Gate and Hewes interview can be seen on the National Geographic channel September 29 at 9 p.m.