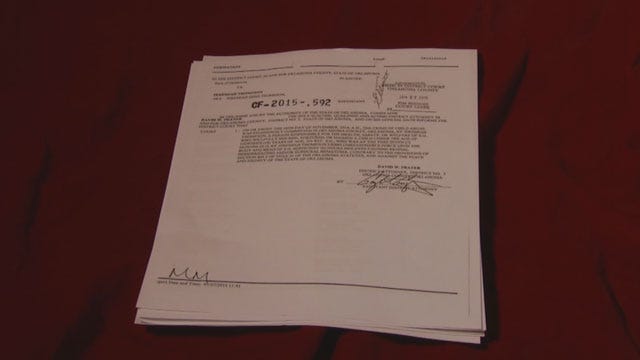 An Oklahoma City police officer has been charged with child abuse.

Investigators said he is accused of shaking and injuring a 7-month-old baby he had been fostering for a month.

In November of 2014, Thompson called 911 from his Edmond home about one of his foster children having trouble breathing.

“This is very sad for everyone involved - the foster family, our agency, the biological family,” said OKDHS Spokesperson Sheree Powell. “This is a tragedy,” she added.

DHS placed a 7-month-old girl and her 2-year-old sister with the Thompsons.

On Nov. 18, Thompson called 911 while his wife was at work and said the infant was having trouble breathing.

He said the girl was throwing up a whole bunch and wasn't really looking at him like she had a hundred yard stare.

Court documents said four minutes and 22 seconds into the 911 call, Thompson said, "I did drop her as well...from a height of 3 to 4 feet...onto padded carpet."

Doctors said the baby's subdural hematoma and extensive bilateral retinal bleeding could not have been caused by a single fall incident.

Doctors said the injuries were likely from a person shaking a baby.

“There were no red flags, no indications that anything like this could have happened,” Powell told News 9.

Powell said the Thompsons passed every background check and certification with flying colors.

“This particular foster parent did that, passed all of his background checks, home study was glowing on the family and also completed all the training,” Powell explained.

DHS removed both foster children from the home and will not place any other children there.

DHS said the baby is now safe, but she has had seizures and increased pressure in her skull from her brain injury.

According to court documents, doctors said the long term effects of her brain injury are unknown at this time.

Officer Thompson has pleaded not guilty to the charge.

He has been with Oklahoma City police for two years and is currently on paid leave while the case is open.

News 9 reached out to his attorney for comment, but have not heard back.