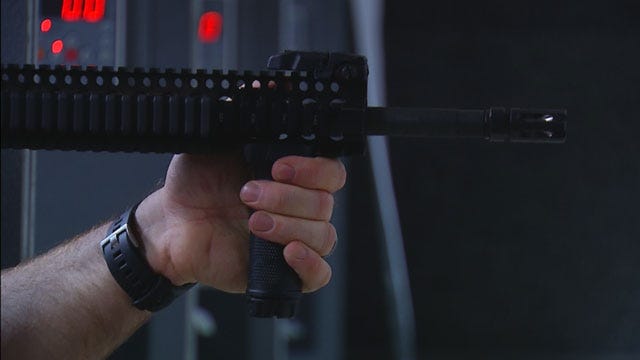 A possible federal ban would force gun owners to make a run for ammunition.

The Bureau of Alcohol, Tobacco and Firearms proposed making the sale of some ammo illegal.

The AR-15 is widely used by law enforcement, the military and sportsmen, but it's not the gun itself getting new-found attention, it's what's loaded inside that has gun owners unloading.

The Bureau of Alcohol, Tobacco and Firearms proposed a ban on certain 5.56 ammo, stating in a release, "no person may manufacture, import, sell or deliver such ammunition."

Blue Buchanan of Wilshire Gun has seen response to the proposal in sales.

"Especially over the last two days we've had a large run on 5.56 and 223 ammo. We've sold much more than we normally do," said Blue Buchanan with Wilshire Gun.

But Buchanan warned; don't be so quick to pull the trigger.

"It's really about a rules change by the ATF over an existing ammunition meant to keep armor piecing pistol bullets out of the hands of criminals," said Buchanan.

The ATF also stated it's "to protect the lives and safety of law enforcement officers."

The ban doesn't cover every 5.56 ammo, just mainly the M855's, which are often referred to as “green tips.” They're also magnetic due to the steel in them. But some customers worry -- when will the Federal Government hold its fire?

"I think it's them just trying to do little bits and pieces to get to their ultimate goal to ban tactical style rifles," said Clint, an Oklahoma gun owner.

Gun owner Clint also said he doesn't want to see himself and other sportsmen being held responsible because he said they only use the ammo for sport.

"Many other gun owners that are responsible gun owners and we don't do anything stupid so why are we getting punished," said Clint.

And with concerns like that, customers are buying all the 5.56 ammo, making Buchanan consider his options while his range may not be able to reload.

"The distributors are pretty much sold out so what we have is what we have for a while until the panic dies down," said Buchanan.

The panic may not die down until March 16, when the ATF stops taking public comments.

In response to the ban, Senator James Lankford said, “If the Obama Administration wants to have this argument, they should do it in the daylight, so Americans can speak out through the normal process.”