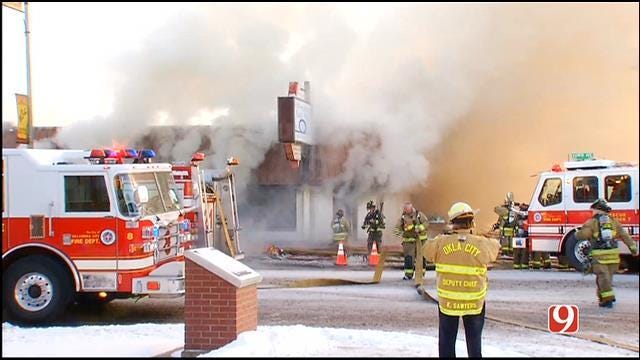 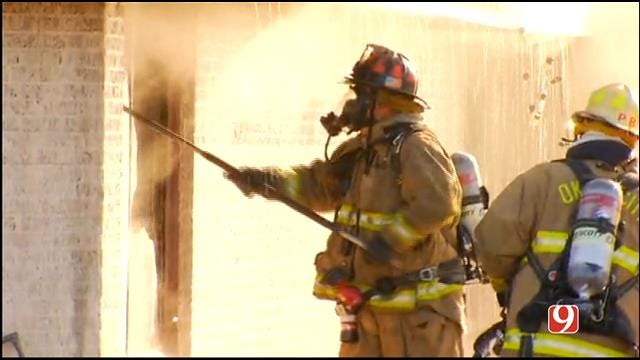 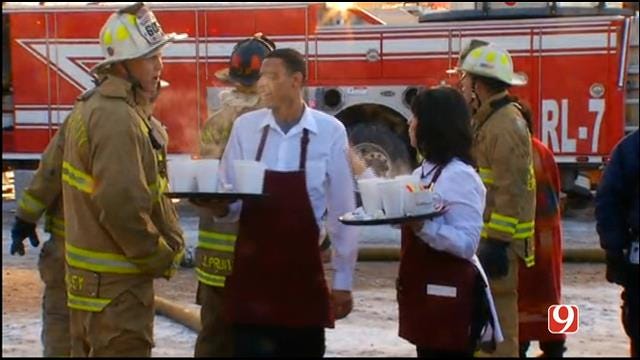 Firefighters have contained a large fire at a business in the historic Stockyards City, Oklahoma, Thursday morning.

According to the Oklahoma City Fire Department, at about 8 a.m., crews responded to the fire at Bentley-Gafford Co., located at 1320 S. Agnew Avenue, which is right across the street from Cattlemen's Steakhouse.

Firefighters on the scene reported seeing heavy flames and thick smoke coming out of the building.  S. Agnew Ave. is closed in both directions between S.W. 15th St. and Exchange Ave., as crews work to put out the flames.

The fire spread to another business nearby, Oklahoma Native Art & Jewelry. Crews were able to contain the fire at about 11 a.m.

About 70 firefighters responded to the fire. One firefighter was taken to the hospital with minor injuries after slipping and falling on the ice.

Cattlemen's Steakhouse across the street allowed fire crews to use their banquet hall, so they could rest and warm up from the cold. They were also providing food and beverages to the firefighters.

News 9 spoke with Yolanda, who owns Oklahoma Native Art. She said this was the third business she has owned that's been damaged by some sort of tragedy.

“The Cattlemen's family is deeply saddened by the loss of three businesses in our historic Stockyards City this morning. The Bentley-Gafford store was a stockyards staple for decades, giving customers friendly, personalized service they've come to expect at any business here in the stockyards. The Oklahoma Native Art & Jewelry was an important cultural part in our community with specialty jewelry and unique art from Native American tribes across the country. Our good friend and artist, Jack Wells, who has been around the stockyards for about 50 years, lost hundreds of his unique pieces in the fire. However, from the beginning over a hundred years ago, we have been a supporting community of goods and services and we are gathering around the owners of these businesses – we're here for each other. Our thoughts and prayers are also with the Oklahoma City firefighter hurt while fighting this fire.”