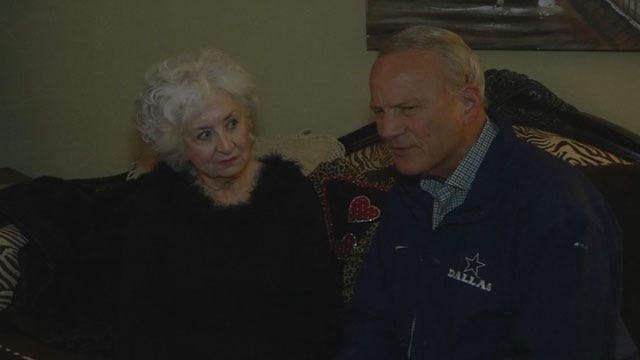 Monday night as SAE members scrambled to empty their belongings out of the closed fraternity house their 79-year-old house mother, a longtime friend of Barry Switzer, did the same thing. She said she's in shock.

“Did you ever get any indication there was anything like this going on?” News 9's Kelly Ogle asked.

“No, no, no. Never heard the song,” Gilbow responded.

“What about … what are you saying to the members who come through?” Ogle asked.

“All I hear them saying is how much they'll miss you,” Barry Switzer said, as he sat next to Gilbow in the SAE house.

“I just can't imagine waking up in the morning and not being here,” Gilbow said.

An emotional Coach Switzer said he agrees with President Boren's swift actions, but hates that so many good kids have been hurt.

“It hurts me because I have a vested interest in this. I am an SAE. And I know the kids in this house. I spent some time over here, and I know what they're like. I wouldn't put up with that crap, and they don't either, and they don't believe in it,” Switzer said.