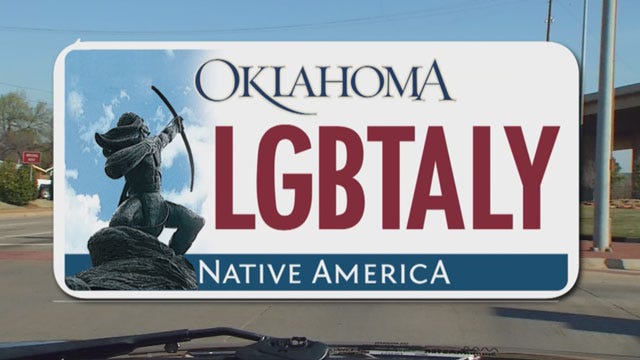 The Oklahoma Tax commission denied a metro man's application for a personalized license plate supporting the gay and lesbian community.

John Keefe wanted to put a personalized plate on his car to show his support for the Lesbian, Gay, Transgender and Bi-Sexual community so he filed an application for a plate that said LGBTALY (or LGBT Ally). The Oklahoma tax commission said ‘no'.

“The gentleman who denied it said it was sexual in nature,” said Keefe.

Keefe points out he's not gay but has lot of friends who are and took offense.

Keefe hired lawyer Charles Broadway to handle his appeal. Broadway says this is more likely a case of the state misinterpreting the term LGBT.

“I don't think the state of Oklahoma is trying to engage in any specific act of oppression or anything like that,” said Broadway. “I think that the term has taken on in the last several years more of a social/political connotation.”

The paperwork denying Keefe's request says "the commission will deny a request if an objective, reasonable person would find that the proposed combination of letters and/or numbers falls into at least one of six categories.”

The first category is “carries a sexual connotation."

But Keefe says the tax commission won't put the brakes on his desire to publicly support the LGBT community, even if it means taking the case to the Oklahoma Supreme Court.

A spokesperson with the Tax commission says they can't talk about specific cases, but if someone feels they have additional information that could change the decision, they can request a hearing.