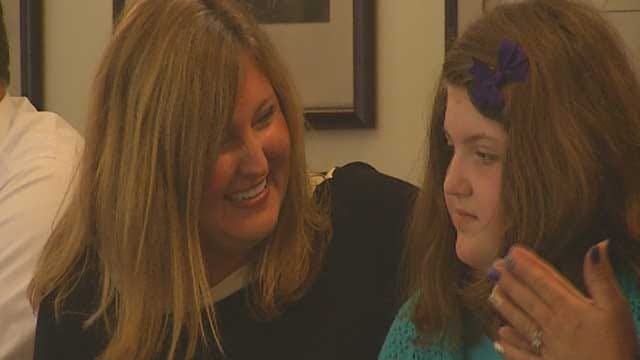 The Senate voted on legalizing cannabis oil for kids who have uncontrollable seizures, Wednesday.

Many people say this could change and save the lives of hundreds of Oklahoma children.

The House already passed the bill 99-2. So supporters said a yes vote from the Senate was the final hurdle.

Katie Dodson missed a half day of school but for an important lesson in civics that could change her life.

“We feel like this is the day we've been waiting for,” said Katie's mom Kelli as they walked into the capitol.

Katie has Dravet syndrome with seizures that traditional medication can't control. But her parents believe CBD oil, may be the answer. Katie's bill, named after her, allows for a trial of the oil at a non-intoxicating level of .3 percent or less.

Wednesday, when the votes started coming in on the Senate floor, they were all yea's.

“We did it, we did it Katie, it passed,” said Kelli as the votes started coming in showing Senators unanimously approving the trial. “Now you can get the medication you need.”

Other parents who have been fighting this fight with Katie said they know the oil works. Shelly Boren took her son Robert to Colorado for a month to try it.

“When they tested him he went from 70 seizures in a 24 hour period to a totally normal EEG,” she said. “Our Doctor did now know what to say, he was completely speechless when it came back to normal.”

Still these families said they weren't sure legalizing any form of marijuana would be easy but so far they've managed to make their voices heard.

“There's only two no votes out of the House and Senate so all the support really puts the humanity into politics for me,” said Kami Nance, who wants to try and get the oil for her two year old son.

And for Katie that's a lesson that goes beyond the classroom.

The Senate did make a couple small changes to the bill, so now it goes back to the House for a vote. But the bill's author, Katie's uncle, said he's confident it will pass through the House again. If the measure passes the House it goes to the Governor who said she supports the concept of the bill.