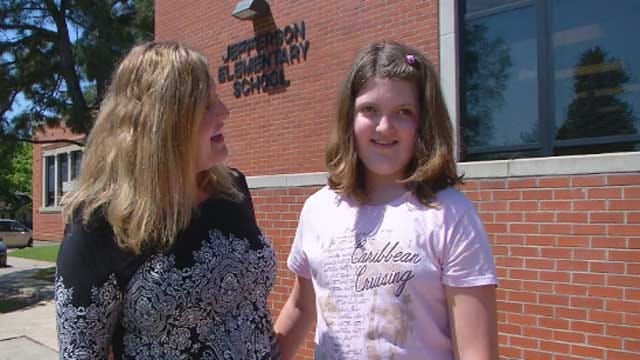 Thursday, was a big victory at the Capitol for many families. A bill allowing parents to treat their child's seizures with cannabis oil on a trial basis is signed into law. Governor Mary Fallin called the family who started the movement.

A phone call between two mothers, many months in the making.

Kelli Dodson anxiously waited for a personal message of congratulations from Oklahoma's Governor.

“I have great news for you. I wanted to let you know that I have signed Katie and Cayman Bill that would allow us to have medically supervised clinical trials of CBD oil,” Governor Fallin said over the phone.

The clinical trials will not only help Katie, but hundreds of other Oklahoma children who have uncontrollable seizures.

Katie's began as a baby. After trying dozens of medications and multiple surgeries her parents believe CBD oil may be the answer.

“There is nothing else left on earth that she can try,” said Kelli Dodson, Katie's mother.

It was an emotional phone call for Kelli who held back tears, knowing now her daughter can finally have a chance to live a seizure free life.

“On behalf of all of the Oklahoma children with severe epilepsy and their families we just want you to know you have our eternal gratitude. We are so thankful,” Dodson told Governor Fallin.

Kelli knew the next person who needed to hear the news was Katie. She rushed to her school to tell her.

It's been a long road to get a bill like this passed. Yet for Katie and other families like hers, it's a journey that now gives them hope.

“Even if this medication can't help Katie if it can help other children in Oklahoma like her it has all been worth it,” said Katie's mother.

Katie's family is already lined up with a Colorado based company to have the CBD oil shipped to them.

Clinical trials will be overseen by multiple agencies including the Oklahoma Bureau of Narcotics.

All other uses of marijuana are still illegal.