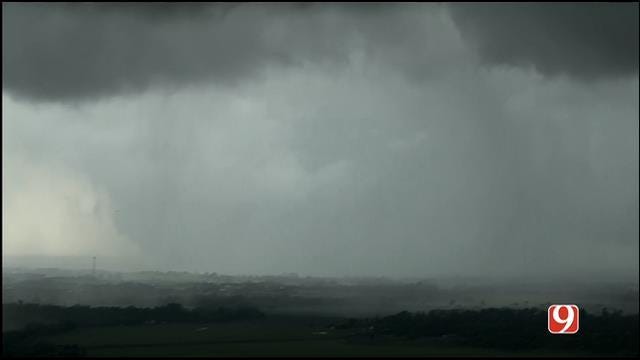 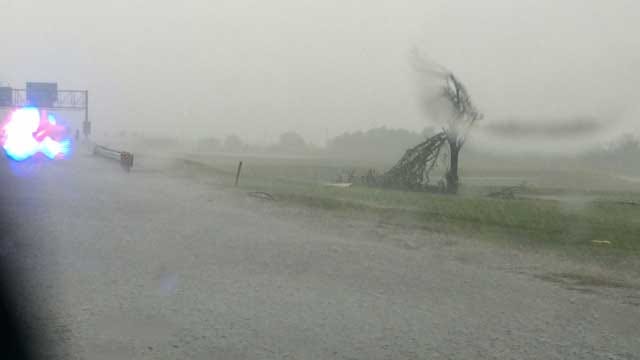 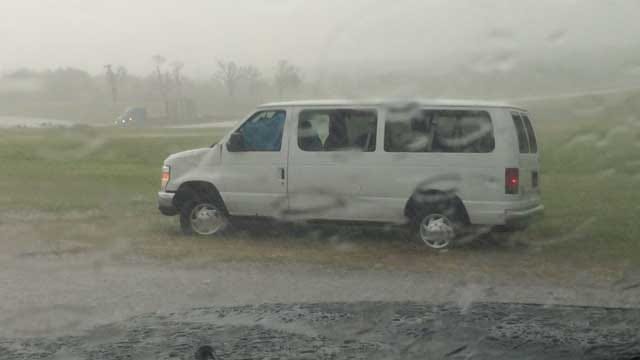 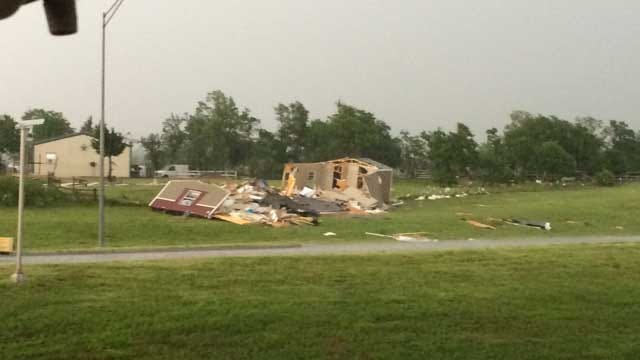 Severe storms have produced several tornadoes in Oklahoma, first starting in rural southwestern parts of the state and eventually making its way up around the OKC metro on Wednesday.

The first tornado touched down four miles northwest of Cyril and the second was close to the town of Cement as the storm traveled slowly toward Chickasha. According to the National Weather Service (NWS), the first tornado was confirmed to have touched down at approximately 2:53 p.m.

Both tornadoes were small and very short-lived. No homes or buildings were damaged because of where the tornadoes were located. The storm has also produced small quarter and golf-ball-sized hail.

Later, one large tornado formed to the east southeast of Amber, Okla. around 4:30 p.m., producing multiple satellite tornadoes with it. There have been reports of damage with this storm, especially in the area of the H.E. Bailey spur and State Highway 9, and homes and other buildings destroyed around Bridge Creek, Blanchard, Norman and Newcastle.

From the sky, multiple damaged homes and buildings were visible in Bridge Creek. Just after 7 p.m. another Tornado Warning was issued for Bridge Creek. At approximately 7:50 p.m. that storm produced another tornado in Bridge Creek area. There has been no word on injuries or fatalities at this time.

The Oklahoma Red Cross plans to open a shelter for residents in both Blanchard and Bridge Creek as soon as the storms safely pass.

The large tornado, reported to be nearly 1/4 mile wide, continued to move toward Newcastle, Moore and Norman prompting the sirens, sending residents scrambling for shelter and harkening back nightmarish images of past tornadoes that have struck the area.

Several power flashes and damage were also been reported in western parts of Norman near I-35 as the storm crossed over the interstate.

The Oklahoma Highway Patrol (OHP) shut down Interstate 44 eastbound at Chickasha and westbound in Oklahoma City, at approximately 5 p.m. Troopers have also shut down I-35 from Tecumseh to Franklin due to downed power lines. Indian Hills Rd east of I-35 has also been shut down due to flooding.

New tornado warnings were issued for Caddo County and Grady County as emergency managers reported a tornado touched down in between the towns of Anadarko and Verden around 6:30 p.m.

Just before 7 p.m. another tornado touched down to the west of Pocasset, Okla. Then, in northern Grant County, a tornado was reported to have touched down near the town of Wakita, Okla., a town made famous by the movie Twister.

Authorities at Will Rogers World airport have reported flooding at Meridian Avenue and Terminal Drive as well as Air Cargo. Passengers, visitors and employees have sheltered in place while the storm passes. Authorities also stress that no one try to make it to the airport for shelter due to the flooding.

Shortly before 9 p.m. a confirmed tornado touched down near I-35 and SE 44th St. in OKC. Vehicles reported overturned on the highway as well as power lines down in the area. Heavy damage has also been reported to a motel and storage business along I-35 and SE 48th Pl.

A Flash Flood emergency was issued for southern parts of Oklahoma City, Moore and Norman just after 9 p.m.

Police in Midwest City have shut down SE 15th St., west of Hiwassee, due to flooding.

Around 8 p.m., crews from the Norman public works, parks, fire, police and the parks department were out beginning damage cleanup and assessment.

In a bit of strange news, the Grady County Sheriff's Office confirms Tiger Safari in Tuttle took a direct hit. Animals were on the loose. Anybody in the area was urged to stay inside. Shortly after 10:30 p.m., authorities said all the animals had been found.

Moore Public Schools held students due to the inclement weather.

Moore and Norman Schools have canceled all Wednesday evening activities.