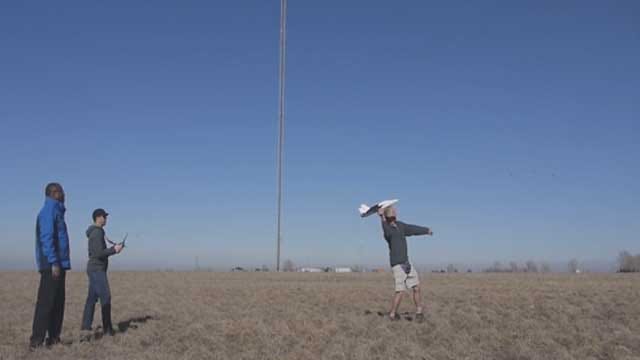 New research here in Oklahoma is designed to give people more of a heads-up before severe weather strikes, making storm season safer. Part of the work is happening at the University of Oklahoma.

What if a drone - or unmanned aerial vehicle as the forecasters prefer to call them - could mean much earlier warnings or warnings where there are now none? OU meteorology professor Phillip Chilson and researchers at the National Weather Center are using hobbyist-style remote airplanes. The airplanes are about 2-pounds and 2-feet long with speeds in excess of 100 mph and decked out with hi-tech sensors.

"This is groundbreaking, this is a game changer," OU Professor of Meteorology Phillip Chilson said. "When you have these different technologies that come around once in a while that really shake up the whole nature of the type of research we're doing. How often can you say that you go out and play with toys as part of your research and do something meaningful for science?"

Right now, when making forecasts, NWS meteorologists use radar, satellites and balloons to check conditions in the upper and middle atmosphere. Conditions at the surface where we live are observed by instruments and people. But there is a small gap in the lower atmosphere where a UAV could make a big difference.

Moore, 2013: The official warning was 16 minutes before the tornado hit Newcastle

Broken Arrow, 2013: A two-minute advance warning of a small, but damaging tornado.

Quapaw, 2014: No official advance tornado warning - only a thunderstorm warning 12 minutes before touchdown.

"It allows you to get to areas that are inaccessible," said Chilson.

Some experts predict that ability could increase tornado warnings from 20 to 60 minutes. The problem now is when conditions are ripe for storms, forecasters don't know exactly where or when one will trigger a tornado.

"I think of it as being a whole bed of tightly coiled springs just waiting for something to happen," Chilson said. "What triggers that spring to release its energy - fly up in the atmosphere - to trigger the other springs around it? That's the part that's difficult."

But he believes UAVs will give a better understanding of what's really happening leading to quicker calls on when and where a storm may turn violent. While there's real excitement in the possibilities of the research, what will it look like in the future when it comes to keeping you and your family safe? There's debate, even inside Norman's National Weather Center.

"These are experiments that have yet to be done, to my knowledge," said Dr. Greg Carbin, meteorologist at the National Storm Prediction Center. "And until they are, you can't make definitive statements that they'll drastically change the state of forecasting."

The hold-up to learning more is the FAA, which is nearly grounding research efforts while it studies how manned and unmanned aircraft can exist in harmony in the nation's airspace. But dreamer and realist agree, any new tool that could help save lives is welcome.

"You know, it'll be another piece of the puzzle," Carbin said. "We might be able to fit some puzzle pieces together and better predict what's going to happen."

Back in February, the FAA issued its proposed rules for the use of drones by businesses.

See An Overview Of The Proposed FAA Rules For Drones

The OU researchers tell us it's a good first step as they wait to see how the FAA will regulate their use of UAVs. OU, Oklahoma State University and two other universities have submitted a joint weather UAV plan to the National Science Foundation.