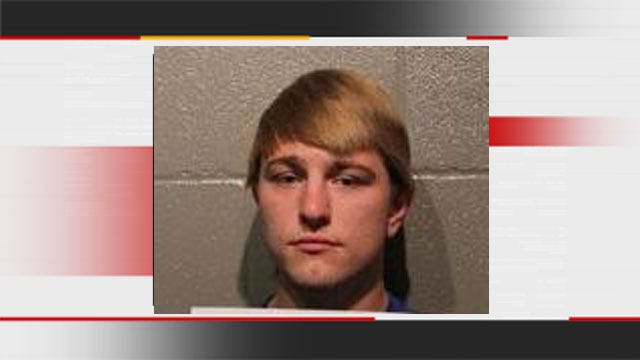 Tristen Killman-Hardin has been sentenced to ten years in prison, with eight years of his sentence suspended as part of a plea deal. He also has to register as a sex offender.

Back in December, 2014, Killman-Hardin was charged with two counts of first-degree rape of an unconscious victim.

The 16-year-old victim told police she was intoxicated and got a ride with Killman-Hardin after a party. She said she remembers very little after that, but an affidavit said Killman-Hardin raped her in his truck and recorded it.

According to court documents, "a short time later via her phone and social media, the victim received a copy of a video that appeared to depict her being sexually assaulted in Killman-Hardin's vehicle."

Many students felt the Norman school district did not take appropriate action regarding rape and bullying allegations. They walked out of class on November 24 in protest.

Today Stacey Wright, the founder of the group Yes All Daughters who helped organize the march had a chance to talk with the 16 year old victim about the plea deal.

Wright says she's been fighting for the rights of sexual assault victims for years, but for the past several months she and others have become their voice as well.

“We're fighting a losing battle if we wait until they get to college to talk to them about issues of consent and healthy sexual relationships,” said Wright. “And we know those are difficult conversations to have.”

Wright says although she is pleased Killman-Hardin will have to serve prison time and register as a sex offender, she says the victory is somewhat hollow - since Killman Hardin will probably only spend about a year behind bars.

“It's disappointment mixed with some outrage - but relief today with the families,” said Wright.

She says the plea deal means the victim will not have to go to court and relive what happened that night.

The group Yes All Daughters also triggered local legislation to better educate students, parents teachers and administrators about how to prevent sexual assaults and how to better support sexual assault victims. Oklahoma Governor Mary Fallin signed the bill into law earlier this month.

Yes All Daughters is now trying to introduce a similar bill on the federal level.

“My argument would be you can't wait until they get to college,” said Wright. “You have to start when they are really young - and teach them boundaries and respect for each other. So by the time they get to middle school or high school - they already have that foundation in place for healthy relationships.”

Wright also worked with the Norman school district to organize a task force to address the issue of sexual assault support and education. As a result, there will now be a student advocate at both Norman High and Norman North to help victims of gender based violence.

#YesAllDaughters has launched a change.org petition to address this at the national level by supporting the Teach Safe Relationships Act of 2015. This bill requires schools across the nation to create curriculum that teaches kids about healthy relationships, how to spot abusive behavior, and promotes understanding of consent and sexual assault. It will teach teens where to turn for help, and ensure that help will be there.