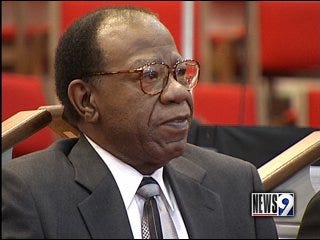 A long-time Oklahoma City preacher is calling it quits, retiring after 22 years. Pastor John Mayshack of the Tabernacle Baptist Church has preached his final sermon.

But his congregation says he'll be an inspiration in their lives forever.

You can see that Pastor John Mayshack has made a difference by the number of people who've come together to celebrate his retirement, and by their enthusiasm to see him speak. The house was packed, and riled up, as the man who's encouraged so many of the people here to live a better life, and live it to its fullest.

"Pastor Mayshack as we call him is a truly inspirational man. He is one that I can truly say is a man of God," said Robbie Jones, a member of the Tabernacle congregation.

Mayshack is also a man who appreciates humor, as he opens the retirement celebration with a joke about his height.

It's the first thing that a young woman named Winter Smith thinks of when she talks of Pastor John Mayshack's influence.

"His sermons are always very witty; he always has three points, and so you can count on those three points," Smith said.

And Winter has counted on those three points throughout her entire life. She grew up without parents. Her grandparents raised her. And she says her Pastor was her inspiration in hard times. Now she's sitting at his celebration with her new husband, and has an accomplished career as an assistant professor in the OU Department of Pharmacology.

"When things got rough in my education and life and things like that so in no way would I be where I am today if it weren't for Pastor Mayshack," Smith said.

Pastor Mayshack plans to teach a course at Oklahoma Baptist University in ministry.