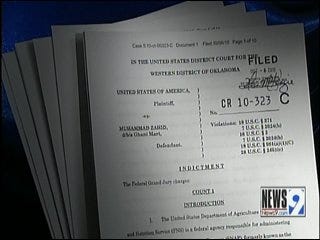 OKLAHOMA CITY -- More than two dozen Oklahoma City business owners are accused of defrauding the government out of hundreds of thousands of dollars. State and federal officials said the employees exchanged food stamp benefits for cash.

State officials said 30 people from 22 stores in Oklahoma City took part in defrauding the federal food stamp program. One store owner was accused of defrauding the government out of more than a million dollars.

Sheree Powell, the communications director for DHS, said this has been an ongoing investigation for about three years. She refused to go into too many details, but said the suspects defrauded the government through the Supplemental Nutrition Assistance Program (SNAP), also known as the federal food stamp program.

"The food stamp program is used to purchase food and nutrition, and not used for cash purposes," Powell said.

The suspects are accused of ignoring the law and giving customers cash back.

"This is something that's very aggressively monitored and tracked and, as you can see, prosecuted," Powell said.

Both Zeleke and Zahid faced the possibility of spending the next five years behind bars, a $250,000 fine and forfeiture of the money they're accused of stealing.

DHS said it planned to release next week the names of the other people arrested.