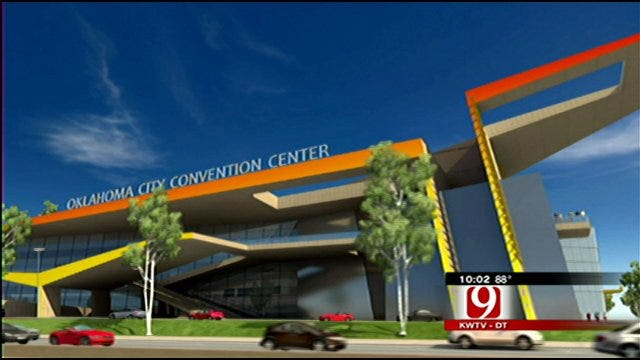 OKLAHOMA CITY, Oklahoma -- A convention center in downtown Oklahoma City may be coming sooner then we first thought.

A consultant originally proposed it be one of the last pieces of MAPS 3 to be built, but on Tuesday the city council will consider moving it up quite a bit.

The downtown convention center will be the biggest and most expensive MAPS 3 project. And so far it's been the most controversial.

"This is what democracy sounds like when it's done out loud and that's a good thing," said Pete White, a long time city councilman.

He says talk of changing the MAPS 3 timeline started after the Myriad gardens turned out so well and a decision was made to push back construction of the Central Park.

That left an opening to move something forward. Councilman White would prefer it be what he calls the quality of life projects.

"I just would like to be sure that we move those that affect more of all citizens, like trails, like sidewalks, like wellness centers, those kinds of things, I would like moved to the forefront as opposed to those things that affect our visitors," White said.

"Creating jobs, having an economic impact is something that I think is very valuable in this process," counters Tom McDaniel.

McDaniel is Chair of the MAPS 3 citizens' advisory board who will recommend the council move the convention center project up nearly three years to 2013 or early 2014.

He argued an economic study estimates the convention center will generate an additional $65 million economic impact annually and three more years of that can't be ignored.

"As a business person, I look at that and think ‘Gee, if we could get a $65 million economic impact on the city, why don't we look at the option of moving it forward in the plan. That makes a lot of sense to me'," McDaniel said.

The new recommended timeline would move the Lower Park design and construction and phase 2 of the transit project back two years, the fairgrounds project up one year, and the River-Whitewater project up 6 months.

The council will vote on the new timeline July 5th.