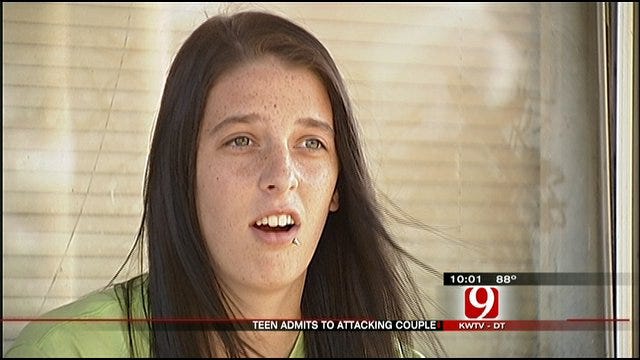 CHICKASHA, Oklahoma -- Teenagers admit to attacking a Chickasha couple, bragging about it on Facebook and then say they did it to teach racists a lesson.

According to the police report of the beating incident, authorities are looking for two suspects.

A third girl who identified herself as Haylee "Ride or Die" Marie on Facebook admits she is a "gangster" and enjoyed issuing the beat down.  The 18-year-old admitted to a friend in an on-line post:  "Bobby call me.  I gotta tell you a story.  I just beat this due's a** and hit a b***h.  I got my second assault and battery charge tonight."

Haylee Sweeden doesn't deny the attack or the post but said she was defending her friends' honor.

"I have family that is black so that offends me," Sweeden said. She insisted that the Mrs. Cooper threw the first punch.

According to the Coopers, police haven't made any arrests, despite the admissions from several teens.

The couple believes some of the teens attend school with their daughter.

Police said even though the admission is in black and white on Facebook, since police didn't witness the attack, the district attorney must formally charge the group before arrests can be made.

"Is that information that can be used in court? I think it is," said Elip Moore of the Chickasha Police Department.

Sweeden's mom said she does not condone the violence, but wanted her daughter to be heard.

There is no word on when or if charges will be filed.