Did You Feel It? Prague Residents Share Earthquake Stories 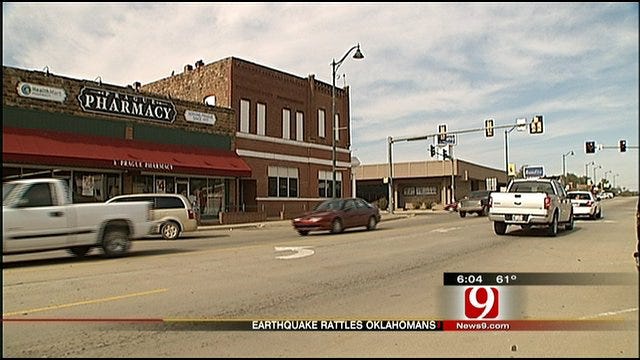 PRAGUE, Oklahoma -- A moderate earthquake and several aftershocks shook up folks over quite a wide area of the state early Saturday morning.

A 4.8 magnitude quake woke up many of you around 2:15 Saturday morning. The epicenter was just a few miles north of Prague in Lincoln County, about 45 east of Oklahoma City.

News 9's Jamie Oberg shows us what shape neighbors and businesses are in now.

"It was a loud boom," Greg Vance of Prague said the earthquake sounded like a transformer blew, a gunshot or explosion.

Oklahomans weren't sure what hit them.

Greg and Stacey Vance jolted out of bed. Greg was armed, but not exactly earthquake ready.

"He grabbed a gun thought it was an explosion or some kind of attack I'm not sure what he thought…ha ha," wife Stacey Vance said.

"It's extra energy in the air everybody has a story and what they were doing when it happened," Cliff Bryant said.

Talk at the Boomerang Diner is definitely the earthquake that hit the heart of Prague, Oklahoma.

"We were scared, my two boys came downstairs, its time all of us have been together for a while. Then we had the aftershocks," Bryant said.

Aftershocks kept coming, 40 have been reported near the couple hometown so far.

Just when Cliff and Karen Bryant thought they had the home front secure, Prague police called them down here to the Boomerang diner, where now after the earthquake they find damage to their business, cracks visible in the bricks on the left corner of the old remodeled gas station.

"A lot of tornadoes a lot of small earthquakes, but this one was a little bigger," Bryant said.

Just when the Bryant's think they can't catch a break with mother nature, the whopping 4.7 magnitude earthquake shakes things up again, revealing a sweeter side for this hometown diner as they now have "Earthquake Shakes" on the specials board at near the front door, and Bryant said Saturday sales from folks coming are the highest ever.

Did You Feel It? Prague Residents Share Earthquake Stories