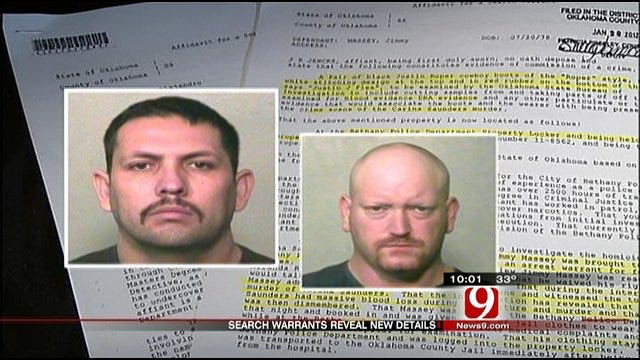 Jimmy Massey, who admits being connected to the crime, is making those charges to police against Alejandro Rojas. Police believe Rojas may have helped murder Carina. The teen was found dismembered in a duffel bag in October of 2011 behind a Bethany grocery store.

Search warrants filed in district court Friday reveal that Massey identified Rojas, who he says decided to carry out, watch, and even help commit the torture and murder of Saunders.

Police say Rojas spent his days as a major part of a drug organization. He is currently behind bars on drug trafficking charges, but now police are looking at him as a possible murder suspect. Search warrants show police are interested in Rojas' cell phone records. Police report in a search warrant that they became interested in those records for location-based information after Massey told investigators that Rojas helped dismember Carina.

"This is something that I would never wish on my worst enemy," Carina's mother, Margie Queen, said in late October of 2011. "It's a struggle, hour by hour … sometimes minute by minute. I miss her calling me and saying, ‘hey, Mommy, what are you doing?' … I would just really love to have one more hug."

It's been about three months since Carina's parents lost their child. They are hoping all of those responsible for the torture and killing will soon meet justice.

"[The hardest part is] knowing that we haven't [got] justice yet," Carina's father, Richard Saunders, said in late October of 2011. "Knowing that somebody sadistic enough did this to our little girl … it's just more than anybody can bear."

According to court documents, Saunders was tortured in front of a female witness to show that witness what would happen to her and her associates if they didn't cooperate with a human trafficking organization.

A second search warrant filed Friday shows investigators are interested in Massey's cowboy boots. Investigators say they want the boots for forensic evidence. Investigators believe they may find blood samples on the boots that may further link Massey to the murder.

Bethany Police say they have investigators working full-time on this one case.

Both Rojas and Massey are currently being held at the Oklahoma County jail.